I checked state regulations regarding raising tilapia and they are extensive and very stringent if you are to follow the law, which is what I will do. So I've decided not to raise tilapia even though that is what I would have preferred. I wanted a food fish that is an omnivore, but am having a hard time finding species that are suitable. I'm nearly sure that I will raise Koi along with a food fish (as opposed to ornamental). Some candidates are: hybrid bluegill, black crappie, hybrid buffalo,… Continue

We are all Dexter - reminiscing a sacred moment

It occurred to me late last night that we are all Dexter. No we don't want to kill humans, but we do want to right the wrongs of the system. In one sense we are direct serial killers of Tilapia, but at the same time we don't often recognize the same act as us bringing death to the Plant kingdoms. AI knew once a vegetarian 3 year old named Orion, who said in response to us trying to get him to eat fish. Does it have eyes? So profound. We identify the sentient life-form as one that… Continue

Just realized i have an old Fluval 303 pump/filter system. I will use that with all three stages running activated charcoal to get rid of the chloramine. I filled my tank (250gallons) yesterday and am letting it sit. I will run the filter for several days to convert the chloramine to ammonia. I should have my chem tester in by then to see if it works.

A trip to Bartertown.

I took a trip to BarterTown. A nearby meca for us devotes of RRR (Reduce Reuse Recycle). It always Exciting to visit BarterTown otherwise known to the uninvited as Builders Surplus. The piles of treasurers are always changing. In these times of economic apocalypse. I don't subscribe to the gloom and doom vision of our world. I practice the Universal laws - Especially the Law of attraction.
The usual cast of characters run this place. Some…
Continue

Where is the advise coming from?

I have lately read some things that give very cut and dried black and white answers about that is necessary for Aquaponics. This really bothered me because it didn't necessarily make note of the other parameters that affected such answers. There might be some advise you shouldn't second guess (like when you ask for help and explain the trouble, then it is usually prudent to listen to the help given) but when very hard fast narrow rules are handed out as if they apply equally to all situations,… Continue

I'm sure that I have missed this along the way. I know that Nate uses a specific fiber media in his towers that was purchased from a supply company that only sells in bulk. I have also noticed that other people have setup towers. What media is everyone else using? I have investigated pads for air conditioners, swamp coolers, green scrubby sponges, floor buffers, Coir mats, etc. Looking for the solution that works for others, fits well in the 6" x 6" fence post, is inexpensive, easy to get and… Continue

This just came across my "kitchen table".... I can see progress written all over it! What a terrific model for other cities/groups to utilize in getting the ordinances changed in their communities to enhance…
Continue

While carefully reading the recent posts by Sylvia and David I quickly realized that they have been converted by those Alien Tilapia. Please volunteer to help us plan an intervention for those Alien follower Aquapons that say "just can't get myself to eat my Tilapia". Even my good friend Ron has informed me that his family is naming his fish. How is he going to be able to get them.
I told him he can eat my fish and I can eat his. Or secret plan
Fellow Aquapons we…
Continue

"Your probably not Crazy''

'Big Momma' is the 'boss' in the tilapia's breeding tank. She'll let the male chase her around for awhile. Eventually she tires of that and turns around and faces off with him. She's about a third bigger then he is. He's finally figured out, that she is the 'boss'.


The other day, as I walked by my breeder tank, 'Big Momma' thrashed the surface of the water. She was trying to get my attention...I guess she was hungry.

I reached over and lifted both lids, I looked around for the…

it's not just for birds, it's also for fish who think they're birds.

I think that maybe the tilapia has evolved so much it thinks it might just be able to fly someday, so they keep trying. Gotta love that spirit.

BTW, they really can live a long time on the ground, I found a jumper that was totally stiff and decided to try reviving it by swishing it in the water. It worked. That fish was stiff and utterly lifeless when I found it, and after getting some fresh water over its… Continue

My first suicide victim or so I thought. 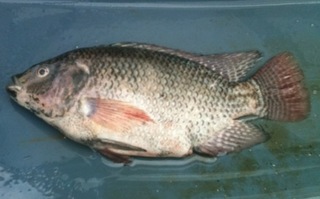 Caution following blog is tongue in cheek or so you my think.
If you followed any of my blogs you would know that I discovered in my interspecies epicurean quest that Tilapia can control us humans telepathically to care and feed them. Now this leads to several amazing revelations. First that these are Aliens who are on our planet with us. The collective conscience of these…
Continue

Its Alive!!! Testing some organic Raft Pots and Floating sheets

It all always comes back to Mother Earth. Gaia as I know her. Being a triple Capricorn it is no surprise I am the Science guy. First the synchronicity of how I got here to this moment in time with this Aquaponics test. I was an Environmental Studies (76) major in College after I left Pre-med and this led me to related career paths including building commercial and residential domes - bioshelters and Appropriate Technology. Which landed me at New Alchemy Institute where I met the creative… Continue