The Door is Opening... aquaponics is the teaser!

It's surprising to me how often the answer is "aquaponics"....
Following the start of the first day of kindergarden for my granddaughter, I attended the "meet & greet" session in the multipurpose room with the new principal. In introducing himself he announced that he was looking for feedback on creating a theme for the school direction & curriculum. I had already noted that a school garden was listed by several parents, for a school project.…
Continue

I need advise ASAP with net pots.
I have 2,000 2"poppleman and made sure to tell the supplier I wanted the one with the lip so it doesn't fall thru. It took a while to receive them and yesterday when we started drilling holes, found that they slipped thru when using the 2" holesaw. The supplier sent me a photo of the only other one poppleman sells, but it's called a slit pot. The openings are larger. It's hard to tell but that looks like it could possibly have a larger "lip" to prevent it… Continue

An outstanding short presentation illuminates the insanity of our current agricultural model... and a place where it's done differently.
Dan Barber, a well known chef, was presenting his talk on TED (Technology, Education, & Design), in response to a problem chef's are having to confront, "How to keep fish on the menu!". With the oceans now depleted of 90% (yes, 90%) of the fish we used to harvest from them, finding something to serve is no longer a…
Continue

Intro: Why I Do It

First Post: Why I do it, what I do. I'm halfway through a move to the real rural agrarian country, from a residential country block closer to town. I'm *this* close to Joel Malcom's BYAP shop but haven't managed the drive, and by the time I finish this move I'll be another few hundred miles further away...

While on the residential block, I did start to build an Aquaponic system up, it was supposed to complement a rabbit shed, by supplying green feeds and herbs like parsley and mint… Continue

It happen late one night! How my higher self teaches me. The 2x4 message.

It happen late one night! How my higher self teaches me lessons of life. 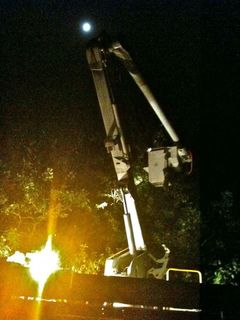 Yes all I had to do was to start talking about power backup systems and the what I call the third stage 2x4 message came quickly.
Early on in my life I realized that being an Italian New Yorker I was a little different than my midwestern college mates. When my Higher Self (yes I am expounding esoteric here) wanted me to be aware of a life lesson I would get three chances to GET…
Continue

I think that was one of the scariest aspects; realizing that this broad group of dedicated… Continue

In the interest of developing food for all these fishes, am wondering if any work has been done to investigate the use of Moringa, a plant (tree) with higher vitamin and nutrient content than most any other on earth - could it be a supplemental food source for omnivores such as tilapia. A world map of where the Moringa grows matches, almost exactly, the area we know as the 'developing world', and is (there) being developed as a food source for people and livestock. Here is a very comprehensive… Continue

Feeding the World....Let's STOP the "programs"

I want to introduce myself to the community. I am Rev. John Hicks and serve as President of Synergy Farms International. When I look at the billions of dollars spent by agencies and ministries to provide food to the citizens of underdeveloped countries, I ask, why are they not instead developing and educating on sustainable aquaponic systems? I think the answer is too easy!

If you fix the problem, there is no more need for the program! The cost involved to fly grain and goods to…

Got back from the 8th annual engineering conference on Aquaculture, Roanoke, VA.

I was impressed by two things:
1) how much…
Continue

Fish seem healthy, though I did lose another this week. But she had been swimming straight at the airstone for a while, so I suspected she wasn't going to make it.

I've removed all of the aquarium gravel, and put in the last of my clay, in the hopes of having a surface to help filter the detritus without raising pH:…
Continue

Can anyone advise what the difference is between using Dow blue boards and the white 2" styrofoam at Home Depot. Do the dow blue boards need to be painted? I don't know if I would ever try to be "Certified Organic" but I would want to do what is safest.. Does it make a difference? Thanks.

I am using two billboard liners to line the "raceways/raft tanks" and was wondering if anyone knew if it would be a problem (in terms of dyes leaching or poisoning the water) to use the printed side up. I know the online source that sells them, says you must place ad side down, but the ad will mostly be covered up by the rafts and the colors will mostly only show on the top 8" of block and slightly on the sides. It's much lighter in color (blues, yellows, red etc), so will be a lot less heat…

How many fish to a school?

I am far from an expert on the aquarium side of aquaponics. There are certain kinds of tasty freshwater fish that school together. Arctic char, for instance. The problem is, I don't have a clue as to how many fingerlings I would need to get before they clump together and act like a school of fish.

This will probably not be my first tank I build, but it's good to know what options are out there.

I think things are starting to get dialed in.

pH has remained high, but stable. Nitrates are up, Nitrites got measurable but I reduced feeding and it went back to negligible. Two dead fish. Plants remain the same.

I had read in several places that gravel can raise pH. So today I pulled out the majority of the aquarium gravel:…
Continue