The Adventures of Island Aquaponics - Part 2

So I left off in my previous post explaining basically how I got interested in aquaponics, to give you an idea of the time frame, that was last summer (July/August 2010).

Needless to say I read everything I could get my hands on, in this case everything I could find on the internet. I talked with my closet friends, my business associates, family and anyone who would stand still long enough to listen.

I really didn't have a clue what I was looking for, but I figured that at…

New to Aquaponics, but loving it!

I feel very welcome here among the aquanauts.  This website is a fantastic resource!  Here is my little system.  Please let me know what you think.  Cheers!  Jeff  Pernell

Not alone; New to Aquaponics

These are my holding tanks and the beginnings of my aq project prior to moving.  Would love to set up dc, if anyone has any cost effective solar pumps/info lmk.  From here will move into the fish and veggies. Thinking Koi or tilapia for Texas. Would love trout, but don't think it is cold enough for them here. The tanks are 3'…

Work Has Begun on First System, Plumbing Still in Question.

I've been hatching plans for my first aquaponic system over the past several weeks.  I am new to aquaponics, and very excited, as is my girlfriend, Molly! (she may turn up here from time to time).  We might be a little... overzealous: We have already covertly reinforced the living room floor in our not-quite-700-sq.ft. complex-apartment. We are officially invested!

My dad drove out today and we picked up another batch of fish from the fishery.  My dad hadn't seen the place before, and the owner gave us a nice tour.  My dad was just as impressed as I am.  What an amazing place.

So the owner sold me about 50 fish (plus a few because he's a nice guy) and I've just now gotten them into their new home.  I can't show pictures of them, unfortunately.  The bin I transported them was lined in black plastic, so you couldn't see them.  And now they're all… Continue

The Adventures of Island Aquaponics

My adventure into Aquaponics begin purely by accident, let me explain. I was born and raised in the Islands of the Bahamas, and I am told my family roots go back to the arrival of the Eleutheran Adventurers in 1647.

As the youngest of my mothers' three boys we each got shipped off to a family member for the summer when we where growing up, and no matter where we went somebody had a farm, so every summer we all had to work the "farm". From childhood I detested doing this, it was hard…

Indulging the Geek in Me

My name is Dan and my wife Jamie and I are new to Aquaponics. We went to a recent local "Self Reliance Expo" looking for ideas on how to do a few things to offset food and power costs. What we found was Aquaponics. While Jamie started picking the brains of the folks at the Aquaponics booth I began looking at the system and how it works. The system was made from an IBC container that had been modified to grow fish and veggies. My thought was, "Now how cool is…

I have added a screen (made of 1" chicken wire and 1/2" PVC) above my tomato plants to create a canopy focused near my light. I am going to delicately weave the leaves of my tomato plants along the screen horizontally. I am trying to give the plants the maximum amount of light to their photosynthetic parts. Eventually I hope for the fruit to dangle below the screen for easy picking.

New Visitor To The Fish Barn.

Normally I love getting new visits but today I was just leaving the fish barn when suddenly I was startled by a guest. Actually I was a bit more than startled. A 3 foot long rat snake slithered through the door way as I was going out.

Perhaps I'm not as eco-friendly as I should be, but either him or me had to go!

Because I spent so much time building the place I felt it should be him. I tried to run him off but he wanted in. So after a few seconds of foot stomping,…

I'm going to add this as a blog and discussion in the group, but thought that I might get some more ideas if it is "out there" in the whole group.

It struck me the other day that we have pieced together a lot around mixed aquaponic design without dedicating any discussion to the thinking behind mixed aquaponic systems at all.  A picture of my system, ever evolving, adorns the group page but what is it all about really?

Well, to start off with, here what it is…

It has been a week since I found a home for my goldfish.  It was a month before I asked for that home that I knew they had to go.  It was about two months ago the water started to warm a little and they started the wiggle dance at feed time. It was about three months ago I was out in the cold, trying to keep the water flowing in minus nineteen f.  It has been five and a half months since all their friends were netted out and eaten. Great care was taken not to cause undue stress  as the…

I transplanted an eggplant today into my gravel bed. It immediately collapsed, folded in half and wilted so that it looked absolutely pitiful.  I chalked that up to an "experiment" and went on about my day.

Within 45 minutes, I went back out into the backyard and to my surprise the eggplant the was completely upright with no signs of wilting. I'm still skeptical, but for now at least the eggplant has come back from the brink.

I tried Tilapia for the first time.

Not impressed by the taste or texture. Rather bland I thought and the texture was not what I am accustomed to. The dish was prepared in a steakhouse and was supposed to be blackened. The flaw may have been with the cook so I will try it again, maybe cooked at home this time.

If it is not a drastic improvement I will change my mind about which fish to grow.

No pictures on this one.

Saturday morning I went out to feed the fish.  They were lively and it was a pleasure to hang out with them.  I did my water tests and the pH was still just a tad higher than I wanted it to be, so I splashed some acid into the sump tank.  Evidently it was too much.  Three hours later I had floaters.  I started flushing with tap water, but my mother was there to celebrate Mother's Day, and she's not an AP fanatic.  So putting her off wasn't an option.  When I… Continue

But meanwhile, I got one set completely built and hooked up.  And I've transfered 4 tomato plants into it.  And finally separated all the new little seedings into their own homes in the big bed (now that there's… Continue

Survival of the Fittest

Today I noticed that one of my Cilantro seeds has decided to come and meet the sun head on... or should I say heads on. I had no idea that Cilantro seeds are actually two seeds in a husk pod. It makes me appreciate nature even more. That is one tough Mother!!!

Below you can see the two heads with the husk still attached.… 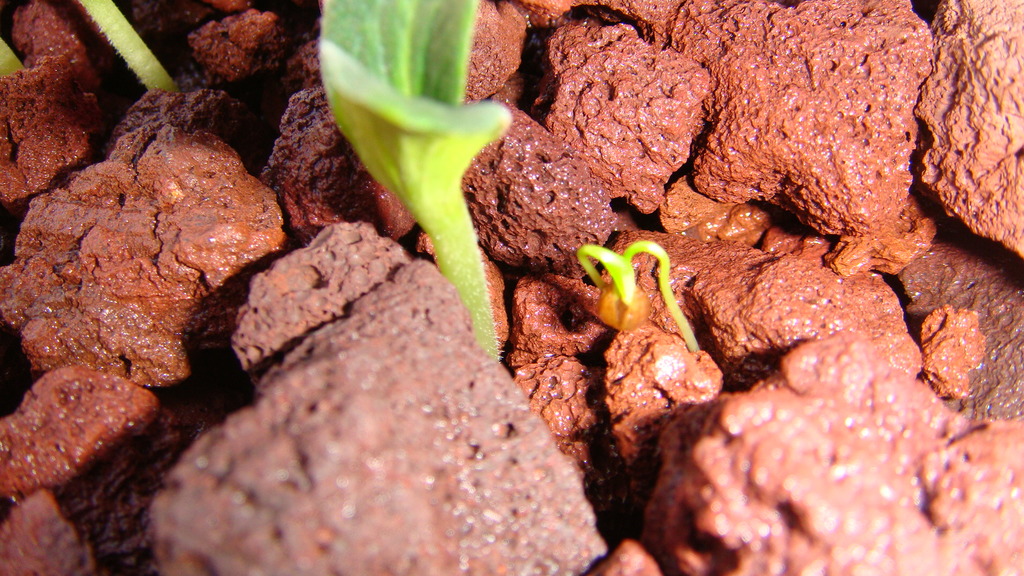 Two steps forward, one look back

Chatting to some friends recently about aquaponics, I re-visited some thoughts that were shared on the forum some months ago.  They are also from an academic background, and we were lamenting how difficult it was to get any type of support out of these places without the institutions immediately wanting to corner IP, and not push the technology forward.  I told them how wonderful it was that AP is developing through forums like this one.  Over here, you can watch new member’s systems develop…