I have added red worms to my system. I was able to get a hold of some free worms thanks to a nice lady. I got about a large yogurt container full of worms and bedding. I put about 20 worms into my grow beds to see what happens. I have started a worm bin with the remaining worms.

I learned a lot about red worms today. I showed up to a…
Continue

LED project, is a go

Just ordered all the parts I will need to create my LED light project. This project will cover a area 6 x 8 if it is desired and will cost $760 in parts and run off a total of about 80watts. Based on my math this will pay for itself in a few years time based on energy savings alone over using HID lights.

There is a lengthy post in the Indoor lighting group with the reason behind why I chose this design over others. This is NOT made to be the only source of light but work in…


I have seeded some Italian Grape tomato and spinach a couple of different ways. I directly placed some spinach into the right growbed about 1/2" below soil line. This is slightly above the water's max fill. I have also planted some spinach and tomato seeds into some 1"x1"x1" rockwool cubes. It has been only about 4 days since I seeded so I expect to see sprouts soon. I placed the cubes in direct sunlight beneath a window to help expedite the growth.…

I am just now begining in aquaponics.   I was intrigued after coming across the idea by accident on the internet (couldn't tell you exactly where on the net).   I've been both a gardener and into aquariums for a good part of my life, and I haven't been this excited about a hobby for quite some time, so I think this is good for me to try!   Also, as a former school teacher and present parent, I think this is an awesome way to learn about ecosystems and the balance it needs to have to work. …

As I await the last load of sand, am trying to plan ahead...  This first greenhouse is an experiment of sorts, but must be economically viable so I can expand and continue to pay my two employees.  I am torn between a drip system and flood-n-drain.  I plan on at least experimenting with one raft NFT at the end of whichever system I choose.  My fish tank ( with between 350 to 500 Tilapia) will support four (4) 60 foot growbeds, 12" deep, with a few vertical systems added in to see if I can grow… Continue

I just couldn't get the pH down far enough, so I finally stopped at the pool supply and bought some muriatic acid.  I poured about a cup into the first of the sump tanks so it would filter slowly through the second tank and into the fishtank.  After testing the pH 24 hours later, it was still quite a bit higher in the sump than the fishtank, so I think that means it was incorporated slowly enough.  I'll test again this weekend, but I'm expecting a pH of about 7.4 and might add another half cup… Continue

The system is doing great. Been running for 85+ days now. My greens look very green and are getting bigger. Still no carrot mass under the medium. Oh well. I have some grape tomato seeds germinating and plan to plant those girls soon. I’m also going to look into getting some spinach because I’ve read that it grows well in a system that floods as often as mine.

My goldfish are doing great and they are slowly growing. There are eight left. It has been that way for the…

Hundley Farms will be doing business as Veggies, Herbs, and Fish....a website will be up shortly.  The attached pictures show the greenhouse frame and the future roadside stand....48 tons of sand have been delivered for the greenhouse floor base....16 more tons and gravel to be delivered next week.  The 50 tons of pea gravel will be for the final floor.  The well and electric should be in within the next couple of months and full operations are planned to start in July 2011. My plan has changed a few times, but this is my current plan for building my backyard aquaponics system.  My drawing is pretty crude and not to scale, I know, but it's the best software I have available to make the drawing.  The grow beds will be two 100 gallon Rubbermaid stock tanks and the fish tank is a 30 inch tall x 4 feet wide 200 gallon HDPE fish tank. I've searched…

It has been a few…

The system seems to be getting stable. I am currently at 8 fish and some underdeveloped carrots. The roots of my carrots are not forming into a tuber.  I have Italian grape tomato seeds en route and hope to have better luck with above ground fruit. I am able to see that the carrot greens are a nice green color with only traces of light green on a few leaves.  I have confidence that the plant food is available in abundance for tomatoes.

I really had a struggle with figuring out what size the sump needed to be to handle the water load from my two grow beds.  As LUCK would have it, the system as built works perfectly. With the media in the growbeds the amount of water draining back to the sump tank is about 3 or 4 inches under the rim.  Perfectly sized. To that end, let me share my bed sizes and capacities...

I started researching AP about 3 years ago and decided that I'd try to make a system my self.  After much trial and error, I've managed to place all the pieces together.  I decided to build the system in a greenhouse.  The harbor freight 10x12 greenhouse was an affordable choice.  I am moderately satisfied with it.  I don't think that the quality of it is up to par, however the price isn't too bad.  If money were no object (I wish!) I'd have built the greenhouse from scratch, however when I…

The Florida Wildlife Commission recently provided me a list of commercial fish hatcheries. I thought I'd share the link below for any of my fellow Florida aquaponic enthusiasts that are interested:

Unfortunately, most of them do not have websites for additional research. I guess we'll have to resort to the old stand-by --…

I've discovered that instead of the 300 gallon fish tank I was planning for my aquaponics system (stocked with catfish), my wife is more comfortable with a 150-170 gallon tank due to the large footprint required for the larger tank. So I've been researching fish for my smaller tank. I want to maximize fish for the space.  I've received many suggestions for bluegill, so I did a little research via Google. Surprise, surprise....bluegill are being researched as a lower cost alternative to…

All is well in my system. I have only had 2 fish die since my last post. I am not sure as to why, but it is promising. I had to relocate my system to another room because the room it was in needed to be used for storage space. I couldn't fathom showing people my system in a room full of other things. I have begun to notice the lack of growth with my carrots and onions. The greens of the plants are nicely colored but have lost their turgidity and seem to not be producing a larger root. I…

Looking to grow in Ga.

I'm looking at getting my feet wet with aquaponics, have started gathering water tanks,(12' dia x 54", open top), looking at several options for grow beds, already have greenhouse frames,( 1-30' x 96', 1- 44' x 144'), and abundance of spring water. I want to learn the art of aquaponics before diving into commerical production. I was in live production agriculture, and understand mechanical/ electrical sytems and want to incorporate this into my operation. I plan to be heavier in vegetable…

Everything continues to do well.  Plants are growing, fish are eating and active.  Water is finally up in the mid 70's. 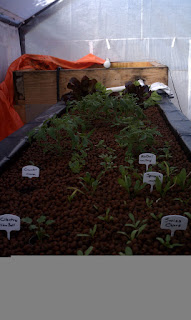 Is there anyone in S.C. that knows how to operate a commercial Aquaponics system?

I need someone who has experiance in commercial aquaponics big or small. Please let me know. Joe

Ok all this is a new thing for me all the way around. I am not a writer or a farmer, but I am going to try to make a record of my family’s attempt to grow some of our own food. We have built a green house out of 1 inch pvc pipe and covered it with plastic. The plastic is temporary till I get some cash and buy the clear green house…

Aquaponics at the Lyons Farmette

These are photos of our first media based aquaponics system. The fish tank is 250 gallon capacity and we have filled it to around 200 gallons. There is approximately 35 square feet of grow space not including the new vertical towers we just added in. This system is about a year old, but we have made many changes in the past few weeks.