I have managed to kill several fish. It saddens me to see them die. I have made some mistakes with running my system and I believe that my lack of paying enough attention has caused this drama. I left the window above the system open until the wee hours of the night. Sometime around 2 a.m. I remembered I had opened a window on a 60 degree day to let my plants get fresh air. What I forgot was to close the window when the sun started to drop. It dropped to just above freezing outside. My tank…

The lettuce are SO happy in their new home!  They're growing so quickly I almost feel I could stand there and see it happen.  These are actually several seedlings in each group, so I'll separate them in another few weeks when they're big enough, and strong enough, that I think I can do it without hurting anyone.…

In the previous post on water chemistry for aquaponic beginners, I tried to post the bare details of the nitrogen cycle, and why we end up with ammonia, nitrite and nitrate after feeding our fish.  There is obviously much to expand on, but then it would not have helped being in “basic and useful info” then would it.  I could bore people with valence electrons and how interesting hydrogen and oxygen really is but who cares.  Truth is I figured most people want the bare basics of why they are…

In this blog I will try to tie together many of the thoughts that have been flying around on my blogs and discussions that followed.  I will start by revisiting some important issues that influence my thoughts around aquaponic design, followed by the presentation of arguments in favour of experimenting with component ratios.  There has been much talk around these matters.  My frustrated thought at one point was something down the line of “I understand that there is a need to have some basic…

A love affair or a tragedy in waiting? (recovered blog)

AP system, how do I build thee, let me count the ways…………………I have been tangled up in ratios and scaling for the last couple of days.  Visualizing a cubic foot is just not possible for a decimal person.  It is also not the way in which my head worked when I started designing.  I am a scientist, thus was naturally drawn to the publications around the UVI and Alberta Raft aquaponic systems.  Not because I thought that they were better, but because they supplied data.  Real sink your teeth into…

Ready! Set! Go!... ok not so fast. Update on the green house Today had another meeting at the school with several people. Facilities Maintenance, Biology Teacher, Principal and consultant. It was in the high 20's today so we walked out to the poor snow covered greenhouse to discuss what we needed to do to get it up and running.   Well the Maintenance guy named everything it needed (a lot) but I think we can get it up and running in a week or so. I smiled because we both know its going to…

I have had some issues the last few days. I have developed poor pH testing habits and failed to see my pH drop below 6. I was using an electronic meter to test samples of water in 5mL test tubes. I would submerge the meter into the test tube until it sat on the bottom. I believe the meter was reading the pH of the glass rather than the aquarium water. I say this because when I cross referenced it with the pH test dye I got staggeringly lower results.

I have started to see…

As of last week I have begun to see more sprouted vegetables. My carrots and scallions are alive! They have stretched quite a bit in only a couple days.

Since the plants have sprouted I decided to hang a shop light with plant/aquarium bulbs. It is about 8 inches above the plants. 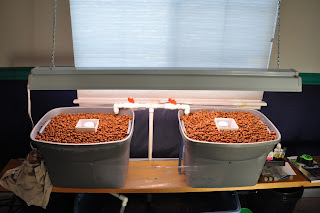 My hopes are that… Well we all know I love to wax on about the esoteric journey of my Aquaponics Zen Quest.  So recently I took my physical body and inquisitive mind over to Sahib's place.  Ahhh! now known to me as the Urban Guru.  He has all of the paths covered.  Float Beds, Gravel Beds, Verticals, NFT and lets not forget several wicking variations.  No I don't think there is a path to…

A Novel Way To Introduce Aquaponics To People

I was reading the blog by Kobus about marketing.  I was trying to visualize what I wanted to market anyway.  I spent 10 years selling the fruits from my trees to the flea market here in Hawaii.  I suffer from severe  burn out from people trying to get my produce for less than nothing.  The thought of having to go out and sell my vegetables and fish makes me want to run away.  Every time someone comes and asks me what am I going to do with the fruit of my labor I am lost.  Yet when I get to…

Im currently trying to grow radishes in my raft system. This is the first time I'm growing radishes on my rafts. I was wondering if it is possible to grow? I already started the plants and I'm about 15 days from harvest (following seed instructions). I notice that the radishes are growing half way in my 2 inch net pod and half way out. Is this how it grows on rafts? The harvest size is supposed to be a pound and the size of a baseball or bigger. Thank you for any info you can give.

Sylvia Was Superb in Today's Presentation at Sweet Water

About 50 people listened intently and were greatly informed and inspired by Sylvia's presentation connecting education, community, and inspiration in aquaponics at the Sweet Water Winter Workshop One in Milwaukee today.  I took careful notes which I will share and draw upon for quite a while, but must return now to the Packer Chicago football game.

The veggies are here!


My vegetable seeds from Burpee arrived last Friday (Jan. 4th) and I immediately germinated after I arrived home from school that night. I ordered Scallions, Nantes Carrots, Cilantro and Catnip (for the cats, naturally).… 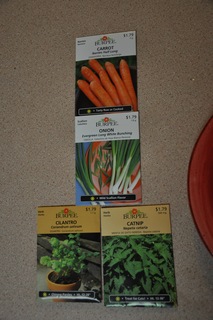 Culture Wagons/Small Is Beautiful Architecture Even Better If Aquaponics Enhanced

If you think this a good idea, please send me an e-mail to godsil.james@gmail.com that I can bundle and forward to the architect and culture wagon people whose work is featured here.

I’m not a marketer, but have been told that I am a very good writer.  Somehow my ability to string sentences together cannot override my desire, re-enforced by years of scientific training, to provide an accurate statement when asked a question.  That, apparently, is not good for marketing.  As a student I once attended a business plan writing workshop where the section on marketing was headed up by an enthusiastic woman telling us how we create hype around a brand and make people want it.…

I finished replacing the liner last weekend, put all 500 pounds of clay back in, then started it up... and the stand pipe was leaking like a sieve.  Grrr.  I just couldn't face moving any more clay, so I procrastinated.  Today I finally pulled the clay back and siliconed thoroughly.  After drying for 3 hours I tested with a pitcher of water (I learned my lesson about putting the clay back without testing).  It was perfect!  I planted the few hardy seedlings that survived the long wait for a… Continue

Tulip Buildng of Sweet Water a Showroom for Your Aquaponics Miniatures?

I would very much enjoy doing my best to introduce miniatures like Sylvia and others in this community have developed at an Aquaponics Miniature Show Room in the Great Hall of the Tulip Biulding at Sweet Water.

There are probably about 100 visitors per week to Sweet Water these days and I suspect the numbers will keep climbing,

especially since we've signed on with the City of Milwaukee to accelerate an eco-tourism project.  There is a highly…

I am building a 40'x60' greenhouse in nicaragua for our  raft system.  Does anyone have any experience in building a suitable greenhouse from locally available materials?

This is for a charitable project to help feed poor schooldren.

Continuing refinement of my micro-system.

I got lucky today, gfi an extension protected the outlet gfi (which powers the back-up aerator), so that layout on a single outlet does work.  I'm guessing from the flashing clocks that the power went out, and then came back on with lamps and growbed pumps both powered up at once, blowing the first breaker, but leaving the air pump running, working as a built in safety trip.  The fish all seem to be fine.  I drew out a line diagram of how it's laid out, and I've attached a photo, after…