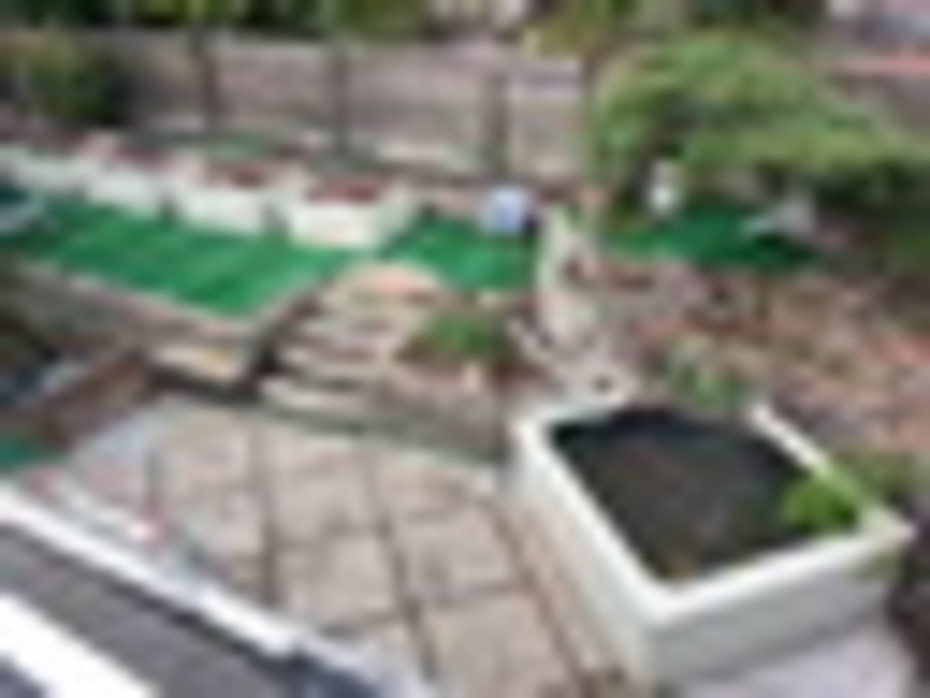 Koi in 500gal with four 4'x4'x1' f&d gravel beds. Made of used wood pallet frames lined with used billboard tarp, insulated with 1.5" foam and enclosed with painted osb board.

Comment by Averan on December 23, 2012 at 9:55pm
Lol! The owner I rent from its a golf instructor. I'm not allowed to remove or damage the astro turf which is fine by me and convenient for aquaponics. :D

It is my opinion that each of us needs to decide that for ourselves. But lets clarify and define some things since this topic seems easily muddled. Poly Vinyl Chloride itself, without any pthalates (plasticizers like BPA, DEHP, BBzP, DBP and others) is a very chemically stable, inert compound. PVC that does not contain any of these or other plasticizers is labeled as u-PVC or PVC-u. This is the type of PVC our piping is made from. It is a very rigid material and again, pretty stable and inert. It does not leech anything that anyone or any lab that I know of has ever been able to show (under normal usage...catching PVC water pipes on fire, I don't consider to fall under "normal" usage). The problem folks have with it rigid u-PVC has to due mainly with the manufacturing process itself (pollution), and some end of life disposal issues, those are not the same as product safety issues when used by a consumer through the coarse of a products useful life, so we'll keep those type of environmental things out of the discussion).

Any type of vinyl that is pliable (like liners for instance) can only be pliable, soft, bendable etc...because plasticizers have been mixed into the PVC. The chemical bonds on a molecular level between the actual PVC and the pthalate/platicizer is really a weak one. On a molecular level, no covalent bond exists between the two. This is why the pthalate/plasticizer leeches out over time. Simple chemistry, so no mystery there. It is these pthalates/plasticizers and NOT the PVC itself that is problematic. Many of these have been banned outright, or are about to be, or have been voluntarily phased out by industry in many parts of the world. This is not the case in the USA, and probably wont be for some time. Industry has lobbied hard, and government has acquiesced. (Not that industry leaders or gov't officials here are 'nicer guys' or anything, just that in Europe there is a much more prevalent culture of protest and mass or general strikes when gov't is not listening to consumer concerns, things like shutting down the entire country for a couple of days tends to get their ear)...Anyways...

These plasticizers can and do leech out over time and make their way into our blood streams. Some of them are particularly nasty type of toxins. (Of coarse, those are the cheapest and most often used...again, particularly in the US). Here is a generic introductory wiki link on the topic that touches on some of the many health and safety aspects of pthalate plasticizers... http://en.wikipedia.org/wiki/Phthalate

Again, these are all things that we need to decide for ourselves and for our Families or customers. But since you asked...It is my personal opinion (obviously) that plasticized vinyl should be avoided in an AP application for some obvious and some not so obvious reasons. But again, that's just me. I'm a big fan of making your own decisions for yourself. There is IMO a lot of fear mongering "junk science" out there, but this does not appear to be the case (to me) with this particular topic.

@Vlad - In the article I just posted on my blog I stated some drawbacks to PVC, but I thought they were safe.  Is it your opinion that PVC liners are not safe?

Comment by Averan on December 23, 2012 at 3:06pm
Hahaha! Nice comparison. I'll invest in a proper liner next time. As good as this one looks and as much work as it took to build I'll probably be tearing it all down in a year when I move again!

(You can't really compare rigid u-PVC with any type of pliable/plasticized PVC, it's like saying cold pressed olive oil and pig lard are the same because they're both fats :)...At any rate, it looks great!

Comment by Averan on December 23, 2012 at 12:04pm
Yeah, I understand. Folks will then also have to swap out all their pvc pipes then too!

At some point you may wish to replace your liners. Many people have used vinyl for years, but it's not considered a healthy choice.  I just posted an article, which I may continue to update as I learn more on my blog about choosing materials for our systems.

Comment by Averan on December 23, 2012 at 7:52am
Thank you Mark! What's funny is that I was so focused on building it as cheaply as possible that I didn't think the osb would look good. In my mind only redwood or some other hardwood siding would look nice like typical raised dirt garden beds. The green paint I used is the same color used on the exterior of my house so it worked out pretty well.

This is really a pretty setup you have. Its proof you can have an aquaponics system that works as well as looks good .