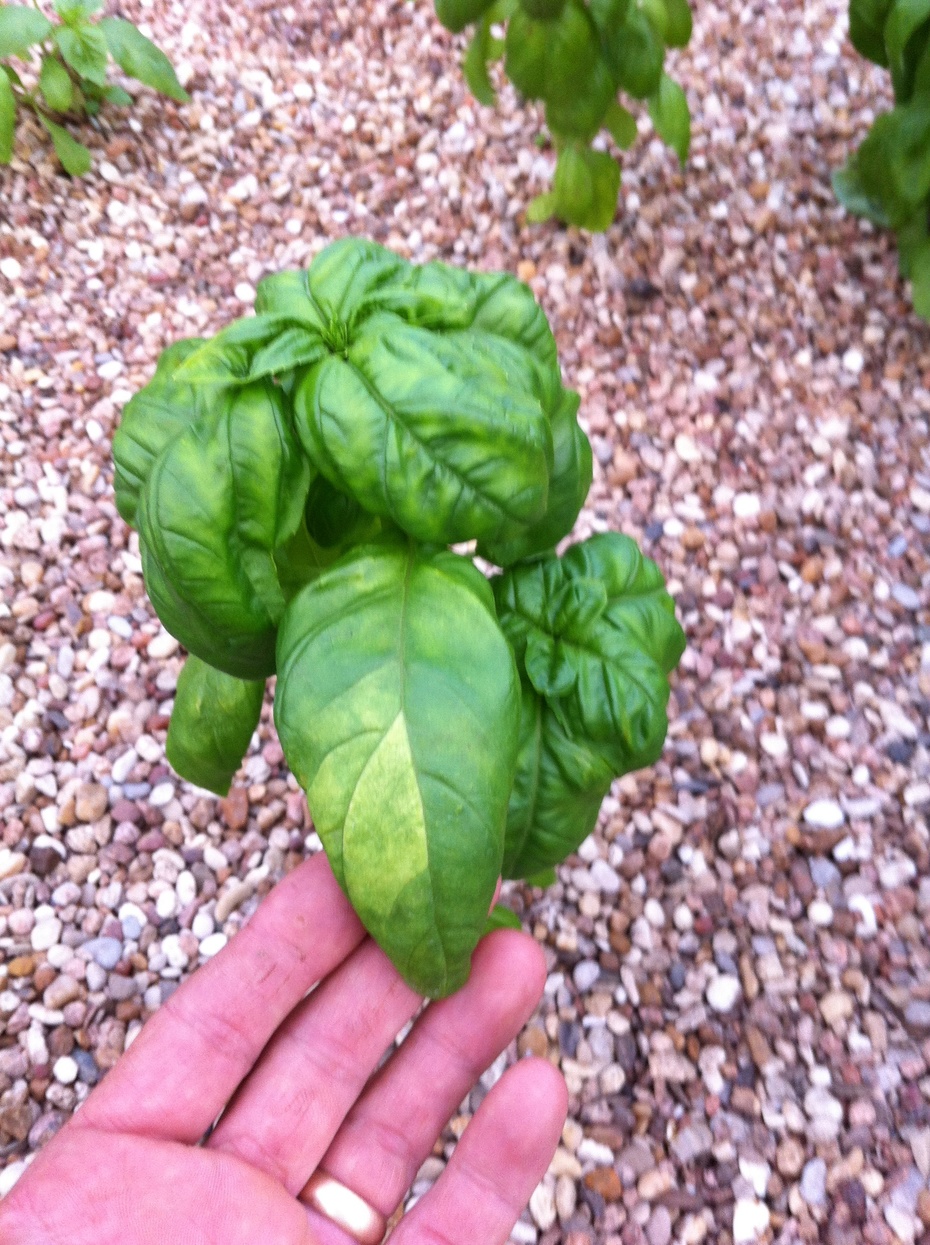 @Vlad - You should probably write a book.

I ask so much from you that it seems wrong to want more, but I wonder if you would be willing to show us pictures of your experiments.  A new group started in October 2012 called   "Aquaponic pest control" would seem a perfect place to post this type of study.  On the other hand I would certainly understand if you wanted to keep your intellectual knowledge for a best seller.

@Bob, Well...I've spent a good amount of time a while back inducing different deficiencies in different plants to get a gander first hand at the way things manifest themselves. The type of yellowing in Rob's photo just does not look anything at all like the intervenal chlorosis caused by an Mg def (we know it's not Fe because Fe is not a mobile element withing the plant, so any chlorosis would be appearing on the new leaves only). The physical pattern of yellowing was a dead give away...Look how the yellowing appears in "blocks" mid-leaf and does not start at the base of the leaf, lessening towards the tip. What happens in a Mg def situation is the plant starts to "pull" Mg from the older leaves in order to supply and support the new growth. And that just plain 'ol looks different than the pic.

Also, Rob snapped the pic at the beginning of Dec...when it's probably cooler and somewhat damp (even in Austin TX) ...prime conditions for fungal pathogens. Various types of Downy Mildew being quite common PITA's, and having recently made basil the scene in the US, it seemed like a logical suspect. That's all.

@Vlad - I'm wondering how you knew it would not be a lack of Fe or Mg.  That's exactly what I would have thought.

so it turns out it was Downy Mildew... i used the Actinovate fungicide and it has been working!

i sprayed every surface in the green house... i will add it to all my new plants. when transplanting, i will put some at the base of the plant, and will include it in all my foliar sprays during winter months.

Downy mildew of basil is a new, destructive disease that appears to be here to stay. It was first reported in south FL in October 2007. In 2008 downy mildew was confirmed in both field- and greenhouse-grown basil crops, as well as home gardens, in many states: NC, PA, NJ, NY, MA, NC, KS, and MO.  Likely it occurred elsewhere but was not recognized. Growers generally did not realize their basil had a disease because the most noticeable symptom on affected plants was yellowing resembling a nutritional deficiency (fig. 1). The downy-appearing sporulation of the pathogen only develops on lower leaf surfaces (fig. 2, 3, and 4). And, since downy mildew of basil is so new in the USA, few knew about it. Complete crop loss occurred for some growers because leaves with any injury are unmarketable. This disease was also reported in Canada in 2008 and in greenhouse-grown basil in Argentina in February 2008.  In 2009 basil downy mildew was found in the western USA, and early in 2011 it was reported in Hawaii for the first time as well as in FL as usual. Rob, I've come to find that pretty much anything that will raise the surface pH of the leaf in the neighborhood of 8.2 give or take, will take care of fungal issues.

So any kind of fish safe base metal complex is fine (so copper, zinc, manganese stuff is out of the question as I'm sure your already know...other people might not though).

NaHCO3 (household baking soda), or KHCO3 Potassium bicarbonate should work just fine. Now I've used homeade hydroxides, in a pinch (I live in the sticks) in the past (like KOH, and even NaOH) but I wouldn't really suggest them because they are really friggin strong (caustic) and need to be properly diluted, but they too will work.

A nice round teaspoon of KHCO3 per litre (so like 4 or 5 spoons per gallon) should work fine. You really got to get at the undersides of the leaves for it to work well.

Comment by Rob Nash on December 9, 2012 at 6:45pm
Vlad, you were right on the money, there was fuzzys under every leaf that looked that way. After removing the effected leaves, they already looked better. I will spray in the morning, any recommendations on the mix?

Comment by Rob Nash on December 9, 2012 at 12:17pm
That would explain the timing. It's been humid in the green house, and I've been spraying all kinds of foliar feeds, and why they have not worked. I will look at them and report. Thanks Vlad, you da man!

Hey Buddy...Now I'm not sayin' it's Aliens, but....Seriously that does NOT look like a nutrient dificiency of any kind to me (though Mg and Fe def would be an intuitive and good first assumption on your part). Get yourself a magnifying glass and inspect the underside of the WORST looking leaf. I bet you see grey-ish slightly fuzzy growth under there. this type of yellowing is not symptomatic of any nutrient deficiencies, but rather a type of downy mildew that will attack basil plants. (Cold-ish humid conditions really bring it on much more than spring/summer type weather)...

Check out the underside with a magnifying glass you should be able to see the sporangiophores of the downy mildew (Peronospora belbahrii)...Again, it'll look like a grey-ish slightly blue almost fuzzy discoloration. Bust out the KHCO3 or baking soda, the spray bottle, and go at it from the underside

Any ideas what deficiency this could be? Ive kept my iron and mag regimen up, Ive sprayed tea and micros and cant get this yellowing to stop. any input would be appreciated. ive had a steady  6.5 ph