Just thought I'd start a discussion here.  This group has been a little slow lately.

Anyway, I've got a growing Zipgrow tower system going and I thought to share some of what I'm discovering about vertical growing and see what ideas others can come up with. 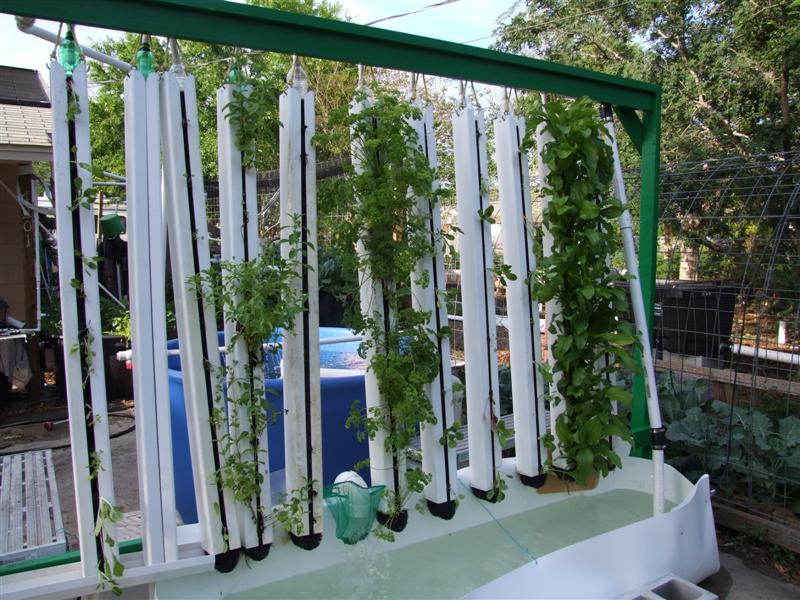 First a bit about Zipgrow Towers.  Our Friend Nate Storey developed them and as far as I know they are the first invention specifically for aquaponics, not simply a specially designed container but an invention.  And not simply something borrowed from Hydroponics or Aquaculture and adapted but specifically to combine the two.  They consist of a specially designed hanging sleeve with the zip down the front to allow the plants to be zipped into the towers with the specially developed matrix media which holds the seedling while also being airy enough not to clog while still filtering the water.  The media is re-usable.  I've been using the same pieces for over a year now without swapping them out and I've had plants in them pretty much continually.

Now I said the system was growing.  It started out as 10 towers hooked up with a sump and a 300+ gallon fish tank (probably about 320-350 gallons in the 410 gallon tank?)  Then this fall I got ready to add more towers to the system and it currently has 30 towers hooked up and it's running with a 145 watt pump.  I'm gonna see if that pump can handle feeding another ten towers.

I think my biggest challenge is going to be keeping a steady supply of seedlings coming on to plant into the towers.

Permalink Reply by Bud Cragar on January 12, 2013 at 8:19pm
Actually it is GPH and the pump is an ECO264.I did have to replumb it as at first it would not feed all four towers. I will probably have to go for a larger pump when the fish go in. For now it's the pump I have.

For now I will plan to leave the pump running continuously. I'm new to this but I do learn and can adapt if necessary .

So Bud, does that mean you have the 3' towers?  I don't see how the Eco 264 could feed more than maybe two towers for long if they are 5' tall.

Now if they are 3' towers that pump could continue feeding the towers but you will likely need an additional pump to circulate and aerate water if you get many fish.

Now seeing as the towers are not as easy to figure for filtration and how many fish you can have.  I would probably start off with small fingerlings at maybe one fish per foot of tower.  So if you have 4, 3' towers, I would say start with a dozen fish (provided there is enough fish tank space for them to grow out) if that is all the filtration you have on a new system.

Thanks for the reply, TC.

These are 5 foot towers hanging over a 50 Gal stock tank. I am in no real hurry to put fish into the system and for now the pump seems to be working. I will be expanding using a 400 gal hot tub in the future and at that time I know that the ECO264 will not be adequate. As far as that goes it might not be adequate now but there seems to be fairly good flow through all four towers.

Right now I am just trying to cycle the system and that has been set back somewhat by a hard freeze here in Phoenix over the last two nights. It's 27 degrees right now so I will probably spend today picking and juicing oranges and lemons.

Once again thanks for the info.

I'm impressed Bud, I've never really gotten that much flow out of the Eco264 at that kind of height.

For initial cycling without fish you should be fine, and you probably could run quite a while as an organic hydroponics or bio-ponics with that pump as long as it keeps flowing so well.

I wonder if the cool weather will make it our way, it's been unseasonably warm here this winter, only one freeze night so far.

The cold is finally leaving Phoenix. Hopefully it will bring you a little cooler weather without the freeze. I have finally gotten all my citrus juiced and spread amongst my neighbors.

As I go along I can see that the Eco264 will need constant tweaking to feed the towers and I will have to up-size. Do you have a pump you would recommend to feed 4 towers at 6 foot head? The Eco264 will probably be put into a small system made out of a blue barrel.

There may be another Eco model that is large enough to do the job but I haven't used any of their larger ones.

I often use the Quiet One 4000 for systems up to about 300 gallons and up to about ten towers.  I'm sure the Quiet One 3000 would handle 4 towers though.  (excess flow can be sent back to the fish tank for more aeration and to create a swirl.)