This past week I noticed a few spider mites in my all hydroton/mineral salts hydro system. Caught 'em early, sprayed with the usual 3-5% oil 0.5% surfactant mix, next day twice with plain water, 2 days later, brewed worm tea spray, next day a weaker oil mix. No more spider mites. But some of the plants were looking really weak. In addition to the little brown burn marks that even that little bit of oil will cause on peppers (peppers seem to be particularly sensitive to oil, unlike a lot of other plants), a couple seemed to be wilting a bit. I should have known then... but, I attributed this to the stress of being moved around, bumped around, lifted out of the little DWC bins, taken to the bathroom and being sprayed with oil etc... Dumb. Real dumb.

I was away from my house (got snowed in elsewhere) for a day and a half, and when I got in today, 2 plants were half dead and a third one (of four total) is looking iffy. I know now, Pythium (or the "thing who's name shall not be spoken aloud") is the culprit.

These plants are just about done with their veg stage and are starting to enter flowering. I've only seen this before in seedlings. Most all of what I've heard/read from the hydro world is that there is 'nothing you can do about it'. Cut your losses, sterilize, start over and try to keep your water temps below 25C.

A couple of months ago I read a post here by Ricky Flickenger about his mold problem, and how he raised his pH slightly and took care of his long standing battles with the mold. At that very same time I had a small Basil plant with a nasty lesion on the stem right above and below the hydroton . There was a greyish-white fuzz on the hydroton as well (I thought, some kind of Botrytis at the time, but IDK). Reading Ricky's post gave me an idea... I took that plant and dunked it (net pot and all) in a solution of water pH 8.8 a number of times throughout the day, rinsed it and put it back. (Did a water change too...These are all fish-less systems). That Basil is still growing nicely today almost two months later.

Back to the peppers. I did a water change re-upped the nutes back to 1.5 EC, but left the pH at 7.6, and have been spraying the roots and base of the stems with water pH 9. Half of me thinks this is just wishful thinking and that these actions are futile...Has anyone ever tried something like this? Combating Pythium with pH? I mean on a very small/very non-commercial scale of course. Am I just doing more damage the plants this way?

The reason I chose pH 9 is because TC has taught us that you can bottle and age urine for a period of time until the pH goes up to 9, and the urea content has then been turned into ammonia. And that this has the effect of killing off many pathogens. I understand that these things may not be connected, but that is why I chose 9 and not 8 or 10 if anyone was wondering...

Any help/ideas/experiences with Pythium and pH would be greatly appreciated (even if it's discouraging). I know that a lot of AP folks are way more adventurous than the hydro crowd, so I though I'd ask...

Pythium seems to be very rare in Aquaponics and my understanding is that it's because of our very aerated water.  But that is about all I've heard.  I think to an extent that aquaponics systems tend to be a bit bigger and since the fish are also at stake, people are more likely to pull and dispose of a diseased or pest infested plant than to go to huge lengths to save it and thus we might simply not hear about the problems or what they were since they were simply disposed of.

but let us know your results, will be interesting either way.

I'll definitely let everyone know how it works out, though I'm not very hopeful about it at the moment.

I too have often heard/read (even Sylvia wrote about it if I recall) that Pythium is rare(er) in AP. (Kinda chalked it up to all the biological competition on the microbial level).

There's a 'ton' of aeration in that bin (well as much as I've normally used, same pump same new airstones). I tend to over do the O2 a bit. Maybe a bit of Hydrogen Peroxide would help? Just kind of graspin' at straws here...

Also, I believe I've discovered what might have contributed to this happening, as I've never had this problem before, and I (as usual) sterilized everything (bins, air stones, tubes, net pots etc... and used new media, not boiled hydroton from a previous grow) All other equipment was the same, or same type...There was only one thing that happened differently. That being that the bin that I bought (from the same store, from the same manufacturer as always...bowed out with the weight of the water this time, which had caused the styrene raft to sit directly atop the water (usually I have an air space of 1-1/5 or so between the bottom of the raft and the top of the water to keep things from getting too wet. Especially with larger (than 2") net pots that protrude beneath the raft...Drats!

I've wedge some wooden shims in place to compensate for the bowing, and now have an air space of over an inch or so.

The roots don't look so good, but are less brown than before, and have kind of cleared up a bit. This is probably more to do with my neurotic spraying (and thus rinsing them) more so than any Pythium being killed off...I don't want to get my hopes up, but am prepared to see this out to the end, until the plant(s) die, or bounce back. Since the damage is done, figure I might as well try to learn something from this. Fungicides, like Potassium BiCarb, work in part because they raise the pH on the plants leaf surface, so I figured maybe the same could be done for the roots?.

Pythium by the way, I've come to find, is not a fungus at all, but was mistakenly classified as such a long while back, and that bit of misinformation is still being promoted today. It is a parasitic oomycete. The stress of the whole spider mite and subsequent spraying episode probably made the infection worse real fast...

It's a DWC bin, or bubbler some call it. The potassium BiCarb is on its way from the states, so it will be a little bit before it gets here. I had ordered it for use this coming year in the AP greenhouse. Right now I'm using Potassium Hydroxide in water to get a solution of pH 9. (one pH point higher than the BiCarb to try and treat the Pythium).

Yeah, checking twice a weak for critters like mites with a good magnifying glass is important.

It does seem that peppers are more sensitive to certain things than a lot of other plants I've grown. But I really like the chillis.

Spinosad (or other similar Saccharopolyspora spinosa) product(s) seem really cool. I like that they don't seem to have much effect on a lot of the 'good' predatory insects, and have read good things on their low to no phyto-toxicity. To bad I can't get many of those products here. So I'm reduced to oils & soaps and messing around with pH :)

There is a microorganism out there in a product called Actinovate. It is organic, and sold by Territorial Seed Company. Also controls Phytophthora, fusarium, and verticillium. Might be worth investigating?

Thank you Matt. This seems like it would be worth a shot at least. Couldn't find a distributor here (as is the case for many products), but will see what I can dig up.

Growing 'native' anything is probably a good idea and a bit easier, (well, hopefully :) Tic tac sized eh? Sounds like the perfect snack!

I like my peppers as well. We have a native pepper that grows well because it is drought tollerant. It is called Chili Teppin, Chili Pequine and Texas Bird Pepper.  It is tiny, about the size of a tic tac, but comes with a lot of flavor and packs a punch with capsium. Very tollerant to any kind of fungus and insect. I have a few plants that get up to 6 feet tall during the growing season. They are perrinials and mine have survived temperatures of 18 degrees F.  I just cut them back every spring and they grow back.   I have tried them in h.p. and a.p. and they don't like all the water.   I can take a bag of all the different kinds of peppers i grow to work and share with my fellow workers that are mostly from a country south of our border and they will eat the Chili Pequines first and want more.

I have sent as well as received many seeds through the post with no problems whatsoever. It is up to the country where the seeds are entering to decide. We've never written SEEDS on a package or envelope before though :) I imagine if you are not receiving commercial quantities (or don't live in Australia :) you'd be ok.

Actually, now that I think about it...An Uncle of mine relatively recently tried to send me a packet of some seeds (from the U.S) when they asked him what was in the packet he said seeds. They said the couldn't send them (which was news to us, since again, its up to the receiving country to decide. Later that day he went back to the same post and this time when they asked he said "documents" and I received the package without problems? Go figure?

Ok, for what it's worth, one of the two plants in my little PL lighting-mineral salts system was spared. (Originally there were four). It was also the least affected at the time of the pH shock therapy commenced. As you can see from the photo it's leaning quite a bit. It leans toward the side most effected by the Pythium where the roots and lower stem was turned to brown mush by that blasted parasitic oomycete. I have no way of really knowing whether it was the pH treatments, or not that stopped the spread, but I kept the pH in the reservoir at pH 7.6 to 8.3 for a week and sprayed the roots and affected areas with pH water 9 (wood ash KOH). My Potassium BiCarb came in yesterday, so I made the switch to it, last night. The leaves slowly came back and are regaining a their turgidity and are losing that 'matte' look.

I foliar fed all nutrients and 2 days ago dropped the pH to something a bit more in line with normality (about 6.2). I'm more inclined to think that the water change (less salts) and the lower temps I've been keeping had a lot to do with the fact this plant pulled through (so far). And as with most any problems of any type...the sooner you catch it, the better your chances of beating it. (Again though, I do not know if it was the pH thing that helped, or for that matter, if I'm even totally out of the woods yet).

Everything in the dual root-zone organic-hydro system is thriving ridiculously with no water changes yet. 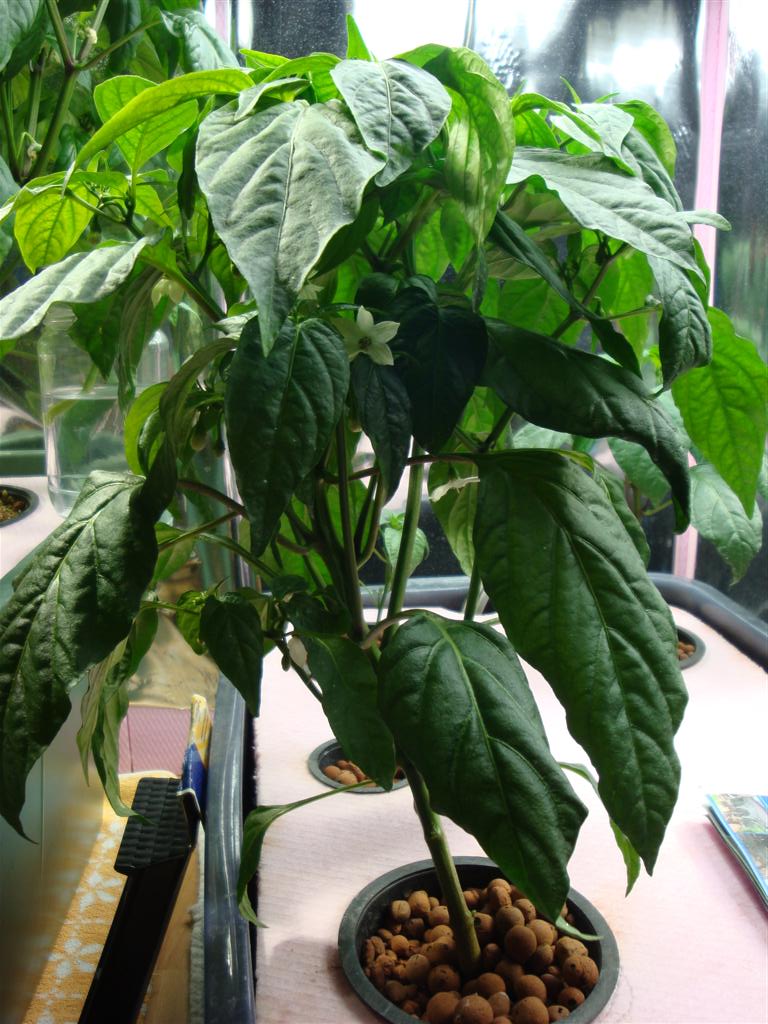 Hello Vlad, did you ever try Actinovate? Your system that had Pythium, has it recovered completely? Do you have any suggestions/advice for others having to deal with Pythium in their AP system?