Sacramento's climate is pretty moderate but for a couple of months in winter it is cold enough that my bluegills don’t eat much, which slows down their growth and that of the plants in my aquaponics greenhouse.  The air temperature in the greenhouse has been plenty warm during the day this winter, but the water in the system doesn’t pick up the heat from the air fast enough.  So I decided to concentrate on heating the water, not the greenhouse air.  I don’t want to use a lot of fossil fuel, so I decided to build a solar hot water heater.  It’s just about ready to test out. 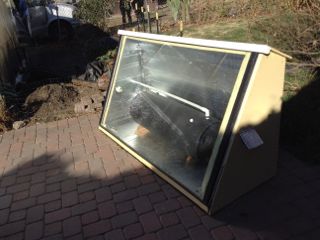 Here it is at 10 AM.  There are different solar hot water heater designs - this one is called a “batch” or “breadbox” heater.  Inside is a salvaged 40 gallon tank from inside a household hot water heater.  It’s painted black and mounted in an insulated box glazed with a double-pane patio door (also salvaged), oriented toward the sun. Top red valve handle is the cool water line coming in from the fish tank (out of picture on the left).

Middle green hose is the outlet for a pressure-relief valve coming off the end of the tank.  If the pressure in the tank ever accidentally gets too high, this valve should allow water and pressure to bleed off (into the adjacent garden bed).

Lower red valve handle (in the shade) is the warm water line heading out to the fish tank. 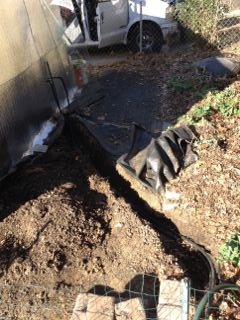 Water lines running in a trench from water heater (just outside picture at lower left) to fish tank in greenhouse (upper right).  After insulating the pipes, I’ll bury them under the path. 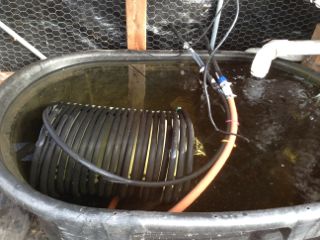 Heat exchanger in fish tank (100 gallon Rubbermaid stock tank).  Coil is 87 feet of flexible 5/8” polyethylene irrigation pipe.  Water comes in from the heater via the black pipe that curves around on top of the coil.  At end of the coil (underneath, not visible in this picture) is a 37 watt submersible pump.  Outlet of pump attaches to the orange hose that leads up and out of the fish tank and back to the heater.

Debated whether to do a closed-loop system like this with a heat exchanger, or whether to just pump fish water back and forth between the heater and the fish tank.  Decided to try heat exchanger first because I’m not sure the beneficial microbes in the water would tolerate the high temperatures in the heater tank, and because I imagine the pipes and heater tank might clog with bio-gunk sooner or later.  Major drawback of using a heat exchanger is that it takes several times as much pumping power to push the water through the coil that it would if I were just pumping fish water back and forth.

I’m unclear on how effective irrigation pipe will be for heat transfer.  Considered using PEX instead but that’s more costly - will only go that route if necessary.  Had the irrigation pipe on hand anyway.

Also unclear on how much pipe length in the coil will be sufficient.

Last detail on this picture:  after assembly, I realized I didn’t have a way to instantaneously monitor whether water is actually flowing through the heater system.  So I added a length of clear pipe (top center) with a tail of teflon tape dangling in it.  Tiny bit of turbulence in the flow makes the tape flutter visibly.  Since this is also a local high point in the system, any air bubbles should be visible here. 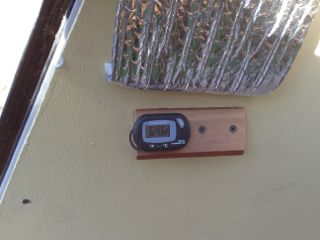 Right now the system is on manual control.  If it actually works (which is not yet a given!) eventually I’d like to automate operation:  pump would run when fish tank water is too cold (or will be in next half-day or so) and heater tank water is hotter than that.

A next step I’d like to do sooner rather than later is to insulate my fish tanks and growbeds.

I haven’t had a lot of opportunity to take down temperature data, but so far I’ve read  temperatures up to 87 degrees F in the heater tank, and I think it goes higher.  Max air temp read so far in the box was 115, but that was only at noon and it probably went higher after that.  Fish tank temperature, without the heater operating, has been ranging from high 40’s to low 50’s.  We’ll see if this system can boost that.  Would like to get it into the 60’s.

I’ve never done anything like this, so if anyone has any comments or thoughts, I’m all ears!  Thanks in advance...

Good idea this water heater - looks like one of my client's solar bread baking box from the early 80's - I was thinking about a basic solar collector with fish-water pumped right through it, quite like a solar pool-heater, using black PE-pipe on a wooden board, no high temperatures to expect, and the tube inside can be cleaned occasionally with a sponge ball pushed through it with a pressure pump (as seen on milking machine piping).

Of course the collector has to be on a diversion and it must be possible to let it drain when collector temperatures get too high or when no heating is needed.

But I actually had a question: would a exchanger coil made of copper pipe harm the fish? It has way better thermal conductivity, than PE, but I have also seen slightly acid water dissolve copper, and the result is a antiseptic solution - bad news for bacteria, I guess.

Since my system is being set up outside in a rented place until I can set up a greenhouse on my own land, Tilapias are ruled out, and I'll have common Carp instead.

I wrote "I use that" but wanted to type "I use that for my work" (as a solar installer) as well as copper. The stainless pipe you need is mostly sold ($$) as insulated double pipe like this http://www.solfex.co.uk/Product/22-solar-pipe-work-systems/

but you can get either cut-off's from an installer (the rolls are fixed lengths, and you always have at least 15ft left) or also as uninsulated single pipe. A "crossed card" coil core from plastic plates with notches on the edges (or some notched tubes, more difficult to make) can space up the windings a bit. The thin, corrugated steelurface is a good heat exchange surface.

You need one set of connectors (split rings and "cap" nuts to make the connections, and there is a little trick to making the flanges either end.

Now I ask myself: if I made such a system (I have old collectors lying around), would I use water in them or glycol.. probably water, and make it a self-draining system that can survive the winter without use of glycol. The small chance of having a glycol leak into the aquaponics is too much a risk.

Conclusion: a self-draining 1 inch PE-pipe direct collector (fish-water cycled at 35°C max collector temp) without glass is maybe the more primitive, but fail-safe and easy-to-build option to go for. (this is basically the pool-heater set-up, but I would use straight PE pipe rather than the corrugated version looking like electrical ducting, for the gunk-cleaning reason.

I have to move on on my IBC-based raft system and build the filter now.

Thanks for the breadbox idea.