I have been a member several months but not participating much until recently.

I am in the Central Texas area and have finally gotten my tote system going fairly well.  However, need some advice in some crucial area(s).  First of all, I am measuring my Ph with pool or pond sticks that I purchased from local Home Depot.  On the outside of small container it says not to store outside.  Guess what section they were in when purchased?  Yep, outside and Texas has been in the 90's for over a couple of months and triple-digits past several weeks mostly.  Question:  What is BEST for accurately measuring the Ph?

I purchased tilapia about two weeks ago, replacing the small goldfish I had because they did not seem to be producing enough fecal matter to grow the plants.  I (unfortunately) have 3/8" expanded shale due to the fact that I read (mistakenly) 3/8" INSTEAD of 3/4".  (Eyes aren't what they used to be)

The fish are growing, the plants are growing, everything is green and beautiful.  I keep the temperature between 80 & 85 degrees by having insulated the outside of the tank with a foil-type insulation that not only looks pretty good, it appears to work well.  I also add new (cool) water from 5 gallon buckets after they have set inside overnight which brings them down to about 76 degrees which is what I set my thermostat on.  This is more difficult of course, but if I use from city water outside, that is nearly always OVER 90 degrees.

I have canteloupe plants I planted from the local Depot on July 3rd and they are running out of the grow bed profusely, making blooms, but not setting or starting any fruit yet.  I have also planted a 'pena' flower (to attract honeybees and it is starting to do just that) by dividing into three different plants.  I also have three speckled butter bean plants, two yellow straight necked squash plants, and a smattering of a few bell pepper plants that I scattered seeds into as well as about 8 different "Rocky Top Lettuce Mix" I ordered from a non-GMO source, about three Brandywine tomato plants that were developed by seed by scattering, and the lettuce, tomato plants, and peppers are growing each day.  None of the leaves are brown, yellow, or off-color and they look good.

Now that you have a rundown on my sistem, my questions are:  What is the best way of getting an accurate ph reading (it usually reads about 8 or more with comparing strips to outside of bottle)??.  Nitrates are HIGH  (according to strips), but plants SEEM to be doing well - but wondering why canteloupe is not setting and am thinking 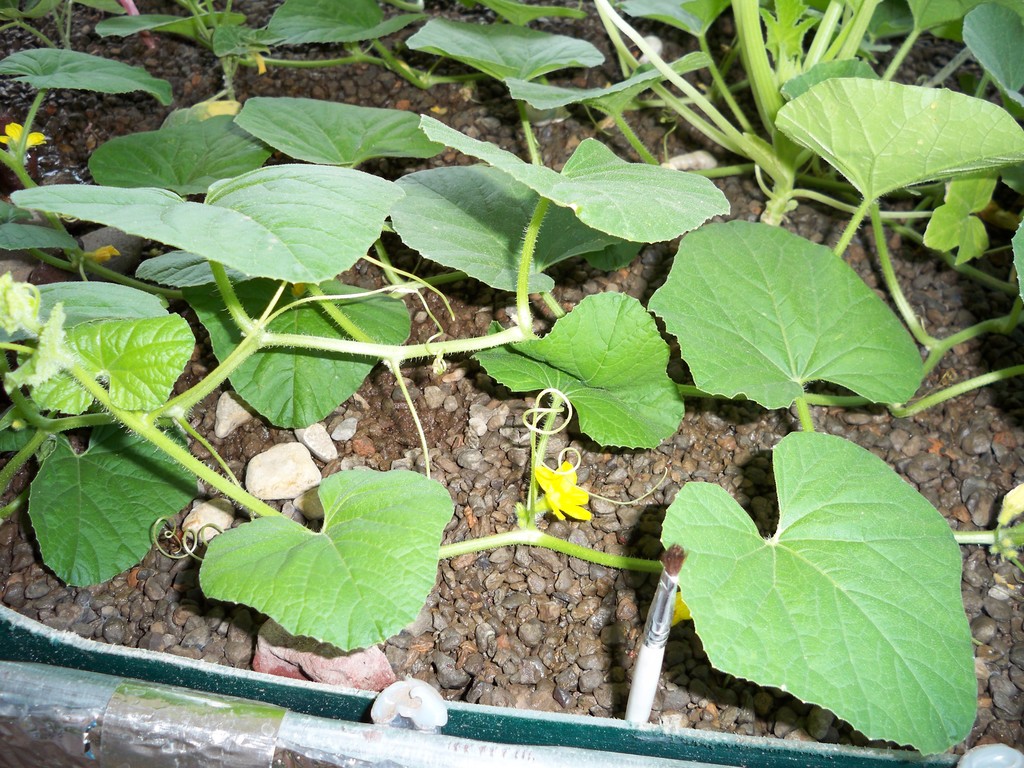 too hot maybe?  I know the butter beans won't set at about 85 degrees or so.  Squash looks on one plant that it is about to bloom and getting close on another.  I believe I need another grow bed with the nitrates so high, but I don't trust the test strips either.  I have enclosed a photo to show progress.  I took this about a week ago.  Any advice and/or feed-back is appreciated.

Test strips are not usually all that accurate.  Here is the test kit that most of us use.

It's the API Freshwater Master Test Kit.  It tests for

You can do a search on the internet and find several places to buy it or you can get it from the Aquaponic Source by clicking the SHOP tab above.

Test strips are not usually all that accurate.  Here is the test kit that most of us use.

It's the API Freshwater Master Test Kit.  It tests for

You can do a search on the internet and find several places to buy it or you can get it from the Aquaponic Source by clicking the SHOP tab above.