I'm having some trouble interpreting the nitrite readings.

Here's a picture of this morning's reading...

Tip, you can put images directly into the posts using the image button which is top left of the post box next to the link button

As to the level.  I generally figure anything 1 or over is just high since the colors never seem to match to my eyes.

If fish are in the system it means you need to take action.  First Stop feeding.

second you might salt the system to 1ppt to help mitigate nitrite toxicity and make sure you have boko aeration and run the pump constantly for a while or do what you can to make sure the filter media is working on as much of your water as possible for a while.

If the fish are sensitive, then perhaps a water change might be appropriate but that can slow cycling so is kinda a catch 22.

If you are cycling without fish, then reduce or suspend your ammonia additions for a bit till you see the nitrite levels start to fall before you dose again.  Relax the nitrite spike often takes a little while to pass so just keep testing to see when the color starts to change to something you can match.

I missed the image button, thanks.

Thanks also for the other tips.  Is table salt ok to use and how much would be needed in 240 gallons to get to 1 ppt.  I imagine very little.  Here's the ammonia level.... 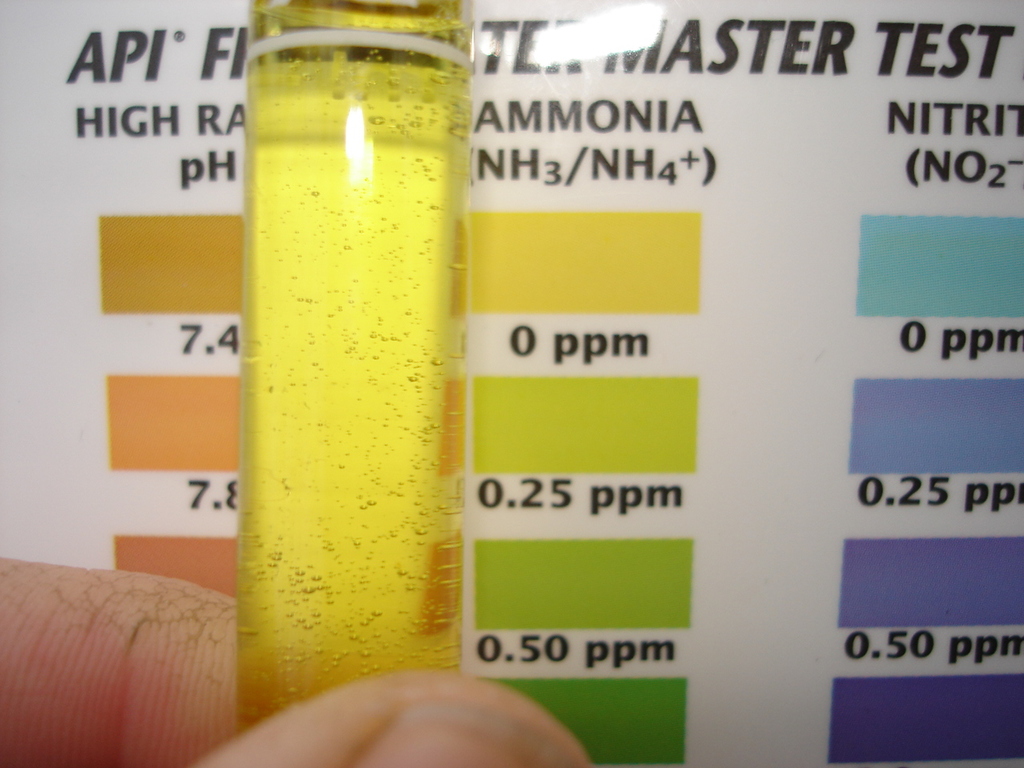 I can relate.  I was cycling fishless and thought I had a safe level of Nitrite - wrong.  You can't go wrong with with blue, light blue.  It's a beautiful thing when it finally happens.

I'm having some trouble interpreting the nitrite readings.

No table salt is generally not the best choice, here is a link talking about salt and the amount needed and so on.

so are there fish in the system?

make sure you don't have any excess gunk building up anywhere and that you don't have any areas trying to go anaerobic since if there are high nitrate levels and you have anoxic areas in your system there could be some denitrification going on which can actually convert nitrate back to nitrite which would be trying to escape the system as nitrogen but you need degassing or lots and lots of aeration to accomplish that.

Otherwise situations I've seen spike nitrites without an associated ammonia spike, sometimes include planting things with too much fertilized "dirt" still attached to the roots, sudden temperature swings can sometimes disrupt nitrite conversion or perhaps you just missed the ammonia spike if you were not testing often.

Sometimes it helps if you show all the test results and share a little more information for people to help troubleshoot the situation instead of simply taking stabs in the dark at all the possible causes of something.

Thanks for the link.

I made sure to wash the seedlings of the peat moss media before planting them.

The tank is clean except for a film of algae on the bottom.  There is nothing else in the tank but fish, hiding structure, water heater, and SLO pipe. There is good water flow in and out and the air pump is a Danner AP 20 which makes the tank look a little like a jacuzzi.  It has a 1/2 air hose and a 6 output adapter.  I added a picture. 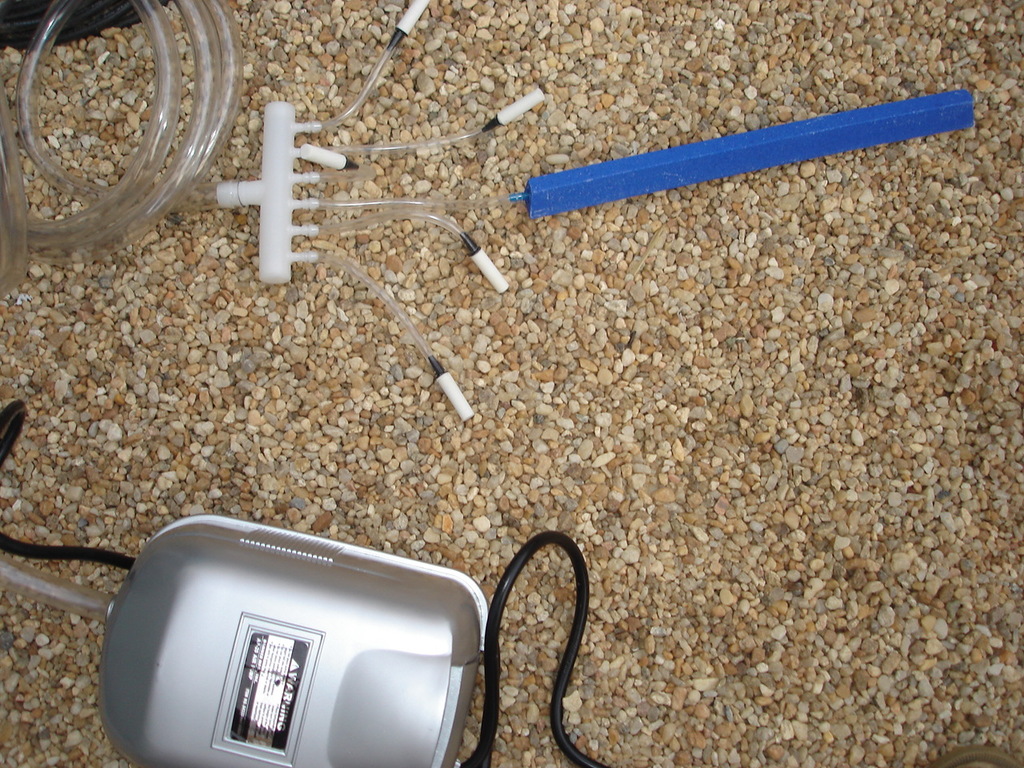 I think maybe the nitrites are from the supplemental ammonia I was adding since the ammonia readings were always low and the growbeds seemed to be knocking it back down even though I was adding .50 ppm ammonia for a few days.  I haven't added any in the past 4 days though.

I just put 10 tilapia in a 240 gallon tank yesterday.  So far I haven't fed them but there is algae growing on the bottom and I read that they like algae.  Before the tilapia, I had about 5 comets and (3) 5" koi for about 3 weeks and 3 weeks before that, just doing a fishless cycle.  I removed the goldfish but left the koi in with the tilapia.  So far so good.

Just salt and stand by then.

Thanks again for the link.  I should have read it first before asking the other questions :)

I was ready to salt the water today but tested the water again first.  Looks like fasting the fish is working. 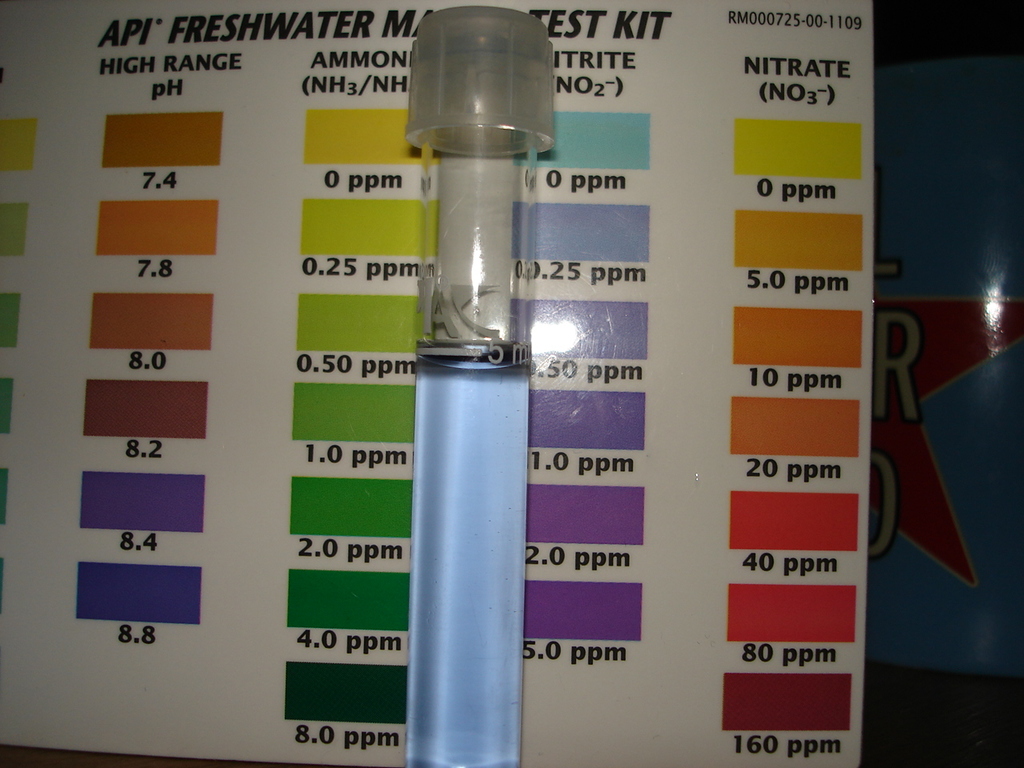 Yep, back on track.

Next time though at the first sign of a nitrite spike, you can salt now that you know.

I figured it was ok to feed them yesterday... some romaine and cichlid pellets.  Here's this mornings test.  The pool tester on the left shows 7.2 but the picture is a bit on that side. 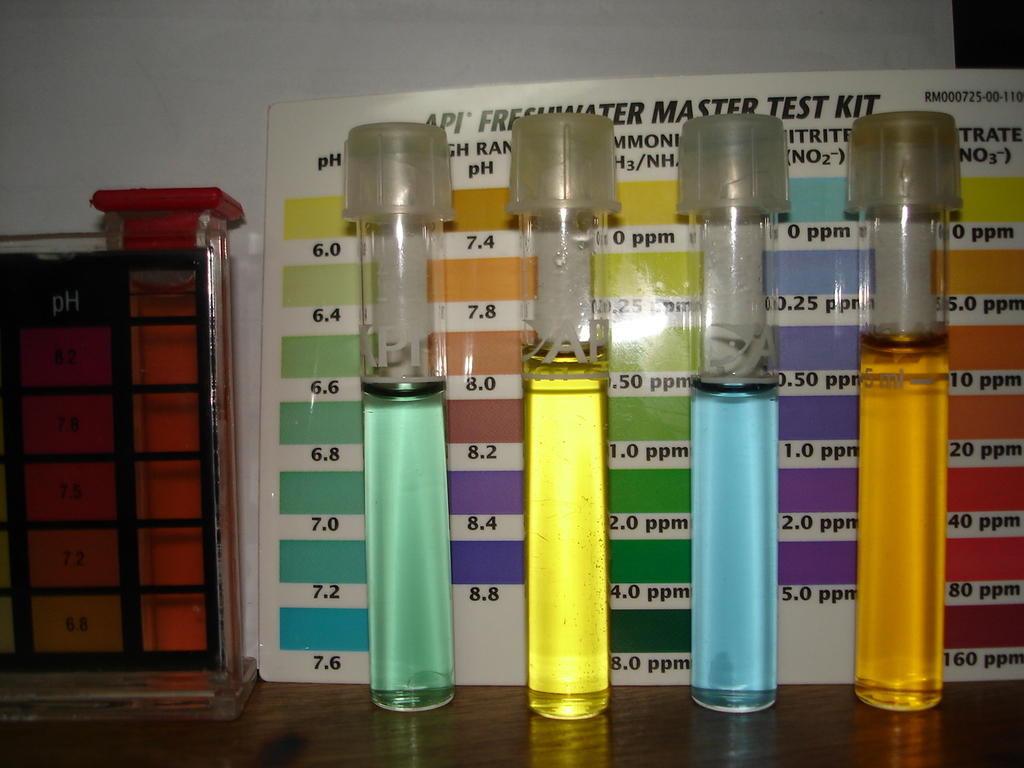 Looking good to me