Question about a very small aquaponic setup I'm trying out in my apartment.  10 gal aquarium and a 2 ft. section of 4 in. PVC pipe as a small grow bed.  I've got two very small goldfish and a small pleco.  The system's been running well since early November.

A couple weeks ago while I was on vacation there was a pump malfunction and about a third of my plants died.  I hadn't gotten around to replacing the plants until this weekend.  Naturally, I'd expect that the nitrate level would be a little bit higher than usual with less plants in the system.

Saturday I used an API Freshwater Master Test Kit to test pH, ammonium, Nitrite, and Nitrate.  pH was normal, ammonium was 0.25 ppm, nitrite was close to 0 ppm, and nitrate was over 40 ppm.  Three times that day, with a couple hours in between, I replaced half of the water (the replacement water tested at 0 ppm nitrate).  The nitrate levels were still over 40 ppm.  Although I was loathe to do so, I added a nitrogen controlling product that claims to control ammonium, nitrite, and nitrate.  After a couple days there has been no change.

I'm starting to wonder if there may be a malfunction with the test kit.  Has anybody had a similar experience?

If there really is a nitrate problem, what do you suggest for fixing it?  The recent thread Fingerlings and Nitrates briefly covered salting as a fish treatment (if I read it correctly).

The nitrate color gauge on the API test kit has very close shades for 40 ppm and 80 ppm.  I know that I definitely have less than 160 ppm.  Even if the water was at 80 ppm, three 1/2 water changes should have brought the levels below 40, right?

I realize that the nitrate levels aren't that high, but one of my fish has been having weird symptoms ever since the nitrates started to get this high.  It's possible that its unrelated, but I'd like to rule it out.

add some medium sized plants.. something more than a seedling. ive had nitrates off the chart and the fish lived.. of course, they were good 'ol bullet proof tilapia. keep us posted.

Nitrates are only lethal in extremely high levels.  40 is nothing.  Trout, which are less tollerant than most, are slightly effected at levels around 125, which cause their growth to slow.

Thanks for your help.  The levels seemed pretty low to be causing problems for a hearty goldfish.  The onset of the weird symptoms must have coincidentally lined up with the "high" nitrate levels.  I'll look for other solutions, and I've planted some well rooted cuttings to continue to absorb the nitrates.  Thanks again!

What "weird" symptoms has your fish displayed?

As for salting, I only do that when I have to top off more than 3 gallons of water or once every 3 months.  I have used it when the fish developed Nitrite/Ammonia burns when my system went a bit nuts back in the beginning.  I would not worry about the Nitrates.

I would recommend not adding any other chemicals to the tank though without disconnecting it from your growbed or moving the fish to a hospital tank.

Thanks John.  Well, the fish that's been acting weird is typically orange and white.  The white parts of his body have turned red, his fins seem pretty tattered (and also red).  He was experiencing swim bladder problems even though he hadn't eaten in about two days.  No visible signs of fungus.  The other goldfish is completely fine.  I sequestered him in a separate fish bowl over the weekend, and he appeared to be improving.  In a larger system I wouldn't be too concerned, but I've learned that fish develop relational bonds in a small system like this, and if this fish dies the other one may get depressed and stressed out too.

Are you adding air to the fish tank. Red blotches can refer to poor oxygen levels in the water.  Was this fish prone to sitting at the surface of the tank? Gulping while the others aren't?  Are you using floating feed, normal (sinking) pellets or flakes? 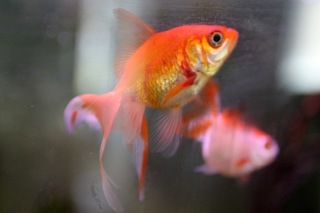 The only other issue would be fighting, Is this one a submissive fish to the others?  Do the bump or chase this fish around?

I have seen sores like this but they were from Ammonia/Nitrite burns and your numbers look good on that end.  Keeping that one in a nursery tank is a great idea till they heal.

There is an air stone that appears to be working well, plus oxygen from water falling from the grow bed.  This has been fighting with the pleco a lot lately.  Do you think these are signs of an injury?

Oxygen and fighting are the only two that seem to fit what you have described.  Plecostomus are aggressive and territorial, I have had a number of problems in other tanks I have had with just fish in them. Do you have Hiding spots for the fish?  3" PVC tubes work well.

There's a glass vase and a "log" that the pleco tends to hide out in.  I'll add some PVC tomorrow.  Thanks!!