Having not been very successful with my first small aquaponics system (I did a whole bunch of inadvisable things) I have taken the learning opportunities and made another system. It will be a peeponics system

I have an IBC tank (1000l) with an SLO which I put in just in case I wish to use fish one day. That empties into a solids filter (same reason) which is followed by another IBC filled to 80% with scoria. The water flows upward through this filter and overflows into a DWC tank (about 1000mm x 2200mm x 90mm deep - this was just the size of a tray that I was able to easily source), which then overflows into a sump.

I started collecting urine about a month before I built the system to make sure it was aged. I added 500ml the first day and measured a 4ppm ammonia level. It took about 8 days before the filter starting changing that to nitrite at any rate, and another 5 days before it was converting that to nitrates at a rate. My system (17 days old), will now dispatch 250ml of hummonia completely in 24 hours (ammonia->nitrite->nitrate).

I am slowly building up my raft plants, so that I don't have to harvest all at once. I am using the tops of polystyrene chilly bins (600mm x 400mm) for my rafts, with 50mm x 70mm pots. At 17 days I have filled 4 rafts with seeded lettuce, spinach, basil, along with some spinach and basil that I purchased in trays from the garden centre (for a bit of a head start), all at 100mm centres to start. The seeded plants look the healthiest, but the transplanted basil doesn't look too bad. The transplanted spinach went in today and it looks pretty droopy tonight. Hopefully it is just temporary stress, not permanent.

My nitrates are building up faster than my plants can use it. I have shaded the water in all tanks the best I can (one of the problems of my last system was that algae grew faster than anything else and I couldn't get plants established very well) and the water is remaining clear (although a little algae is growing on exposed surfaces). Hopefully this will change as my plants mature and I put more little ones on. I am not quite sure how many plants I can grow on 250ml of hummonia a day (my current inputs are 250ml every second day). I can report on that later.

My immediate plans include more green stuff (parsley and cress). My longer term plans include a struvite reactor and some fruiting plants, and to plumb my starter system into this system.

Ultimately I would like to have all of the vegetable ingredients for my pizzas (I have just finished making a pizza oven and fresh veges make the best pizzas) come out of my system. I will name it pizzaponics. I've not seen that word before, so I think that I just invented something new.

If anyone has any advice or comments, please bring them on.

Just another thought. I have 40W of total electricity input into the system. This costs me about $8.00 per month. I expect to harvest about 10 plants a week. The germination media costs me about $0.10, and the growing media (reusable I hope) another $0.10. Hummonia is otherwise a waste material. So a lettuce will cost me about $0.40. At the shop they range from $2.00 to $5.00 depending on the time of year. A plant of basil (pitifully small) for the kitchen is $2-3.

This system should be quite cost effective, as long as I can keep it going long enough to pay back the capital cost (I would do it differently next time - I think I could easily halve the setup costs. Maybe even 20% if I didn't build the possibility of fish into it. ) 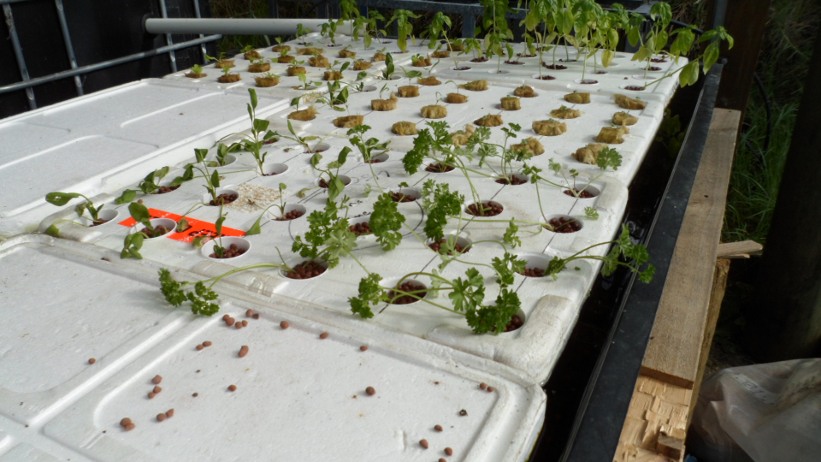 A little under three weeks later.

Basil transplanted very well. A droopy day or so, a few days to establish the first new growth, and then rapid growth. The cost of buying advanced plants was less than germinating in rock wool. Go figure.

Parsley: All of the existing leaves died, but new growth was strong. Far faster than germinating. So the transplants were only good for the root system. But I would do it this way again.

Bib lettuce - as expected and as fast as everyone promised. 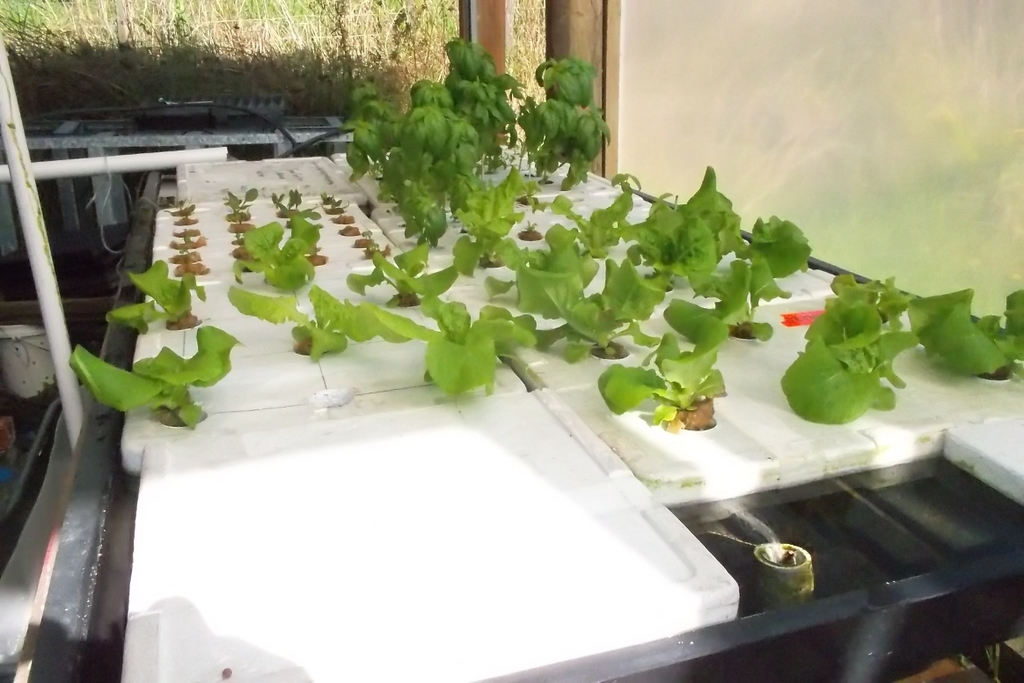