I'm new to the forum so I thought I'd drop by say hey and toss up a few pictures of my first system.

I've spent a lot of time researching and video watching everything I possibly could.  My mother-in-law sent me Sylvia's book which is dog eared and well read now lol.  My wife and I live in an appartment so I had to build a system that would be safe for my lower neighbours while still giving me the maximum amount of output possible.  At this point had I of seen just a few more pictures first I would have re-designed the lower legs to be wider and longer so I could fit one 55 gal drum underneath perfectly for my fish tank.  However, hind sight is always 20/20.

At the same time I'm building this system a good friend of mine and I are building an IBC setup in a green house in his back yard of the house he rents.  It's 3 - 4'x4' IBC top grow beds and 1 245 gal complete IBC for the fish tank.  That system is just at the plumbing stage now so it's a little bit to go yet.  Also the cost of filling that entire thing with Hydroton has kept us at bay a bit.  Likely end up with a 3/4 fill of river gravel followed by a top layer of Hydroton or something.

Anyway, enough of the rambling, here's what's under the hood!

5 goldfish ( cycling the system, when ready I'll have 10 in total )

So the system isn't looking it's best yet, I have a stack of nice little trim pieces that cover everything and tidy it all up but I've been busy fine tuning it first.  Right now my pump is set to full time and my cycle is about a 13 minute fill and a 2.3 minute drain ( give or take) 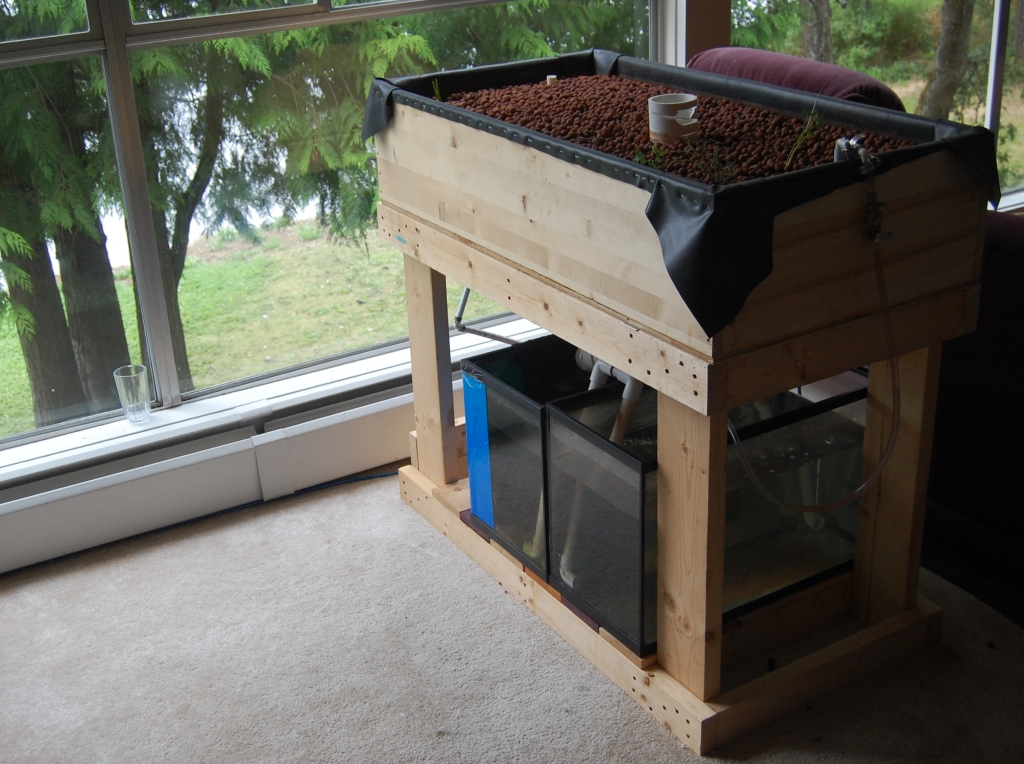