My name is Ryan and I am new to aquaponics and I am in the process of starting my first aquaponics system. As a huge mint fan (and finding it a bit hard to get consistent results from the herb isles in my local grocery), I wanted to have a few different plants for cooking, cocktails, extracts, and ice creams.

Being in a studio apartment I'm really limited on space, time, and noise (I do some voice over work as part of my job). So, for ease of use, I bought into the Back to Roots micro system in early February.

Having run fresh water aquariums with my family a few years back I opted to let the tank do some fishless cycling while I went on vacation for two weeks and aded my plants a week later and fish about a week after that (3 neon tetras). Everything seemed to be going ok, I had an algae bloom which seemed fairly normal since the tank is in the corner of south and east facing windows getting full sun. And I went ahead and cleaned the glass, added some hiding spaces for the tetras and a black snail to help take care of the fresh algae.

I started noticing issues in my system when I was walking by our nearby nursery. The mint there was full, darkly colored, and very strong. In comparison, my plant is fairly leggy, light in color, and the leaves are very light in color. The light color and leggy growth made me do some research and think that I had a nutrient problem: mainly Nitrate!

Having bought in to the system's advertising of not needing to do 10% water changes, run water tests, etc. I was letting everything just go. But the seemingly low nitrate level worried me into getting an API test kit and checking my levels. The results were alarming to the point that I'm amazed my fish aren't dead...

That's right over 5.0ppm of nitrite! In fact the tube had turned dark purple while I was still shaking things (results should take around 5 mins to fully color)

I'm assuming that with the tank being over a month old the tank should be past the nitrite spike in the cycling process, and the strong algae bloom and early plant growth make me think that something more sinister was going on.

The hypothesis I'm going with right now is that the included filter and design does not oxygenate the water enough to support my current bio density. The first thing to happen was the angry bacteria started to strip oxygen from the existing nitrate and reverse the cycle back to nitrite.

This all happened Saturday and I have done a few things to check this:

I have done a few things to mitigate the situation but would still like some advice:

I'm starting to see some results:

I'm happy to be on the forums and hope that maybe some of you can help me out!

Here are some pics of my system 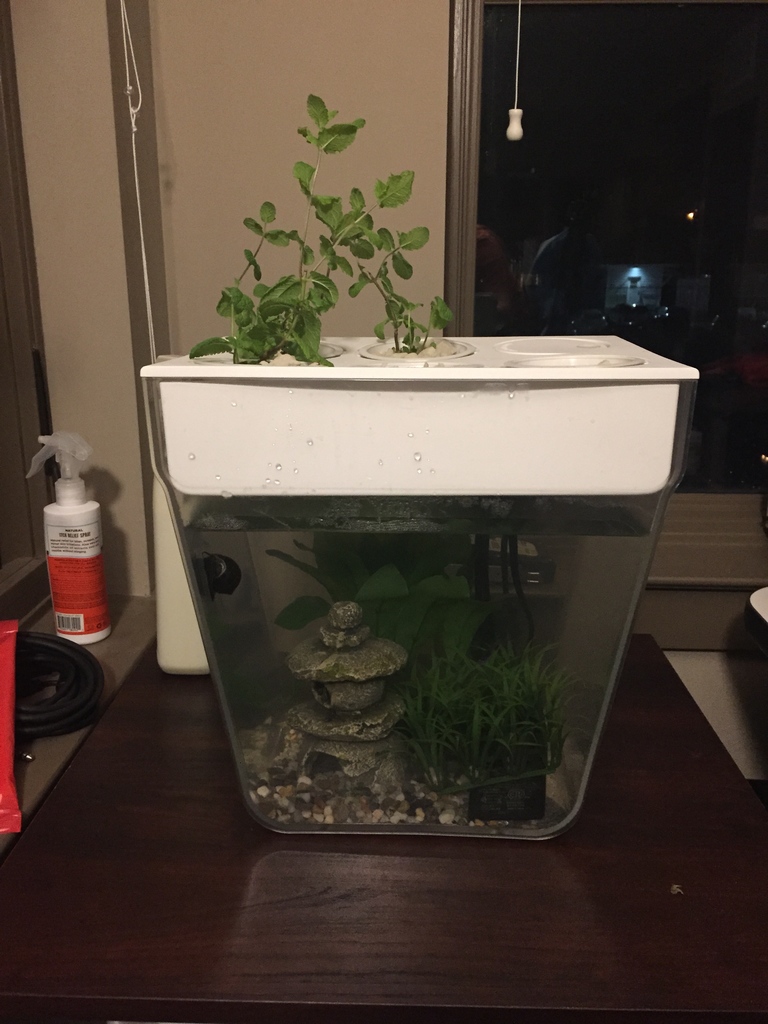 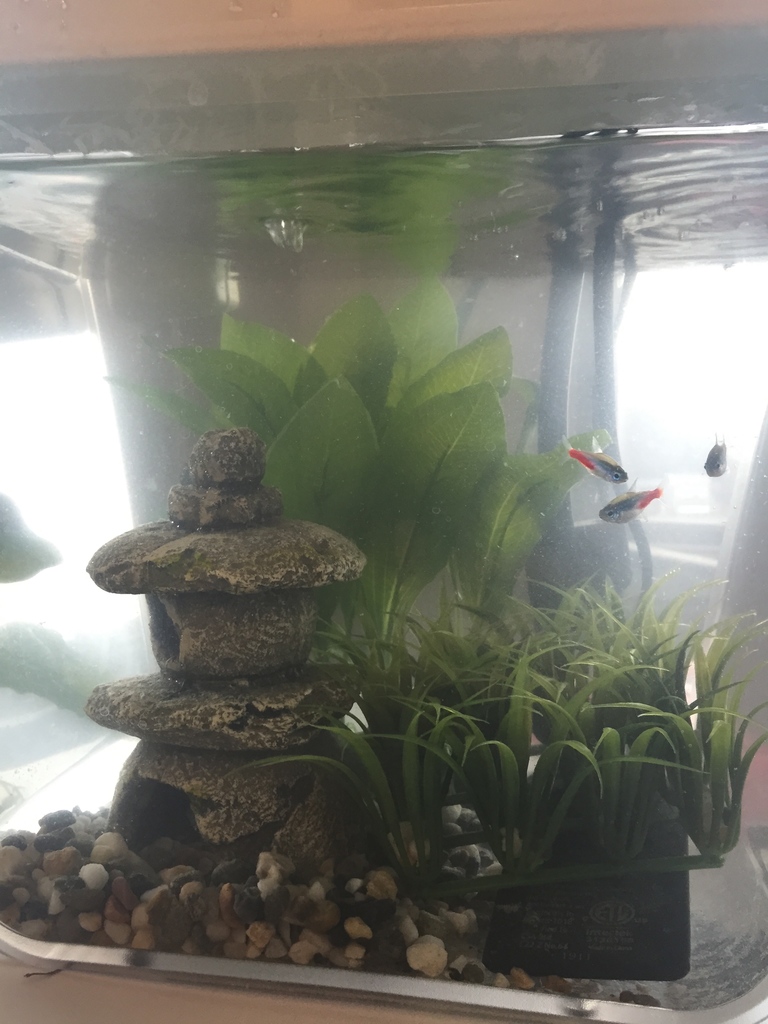 I have the same system but what they don't tell you is what the water has to be for this to work and you need more fish.

I have 7 baby guppies, 5 shrimp in mine and it's not quite ready.  I got an aquaponic starter kit and it has been very usfull.

I got it at Aquaponic source .com

Thanks for the quick reply. The nitrite level seems to keep going down (and the PH level is slowly following behind).

I'm giving him a few more hours to come out of his shell, but I think the nitrites got to my snail and I was too late lowering them.

My plants also seem to be wilting a bit, although I'm thinking that this is caused by the grow pods not getting proper contact with the water, I've reseated the pods a bit and smooshed down my filter media to try and get a better flow.

Ryan, it took almost 2 full months for bacteria levels to rise to desired activity in my 70 gallon system, and I added an organic booster in an attempt to speed the process.  Expect sudden, drastic swings in your system since it is so small.  When considering ppm in a 200 gallon system vs a 4 gallon system it takes alot fewer 'parts' to affect the smaller system, so stay on top of your testing.

The bacteria develop as the environment demands. As waste (ammonia) builds in a new system there are 2 bacteria that are required to convert ammonia into nitrate.  One (Nitrosomonas) converts the ammonia to nitrite, and another (Nitrospira) then converts the nitrite to nitrate. In new systems neither bacteria exist in sufficient numbers.  As ammonia levels rise in a new system, Nitrosomonas population grows, which in turn causes the ammonia levels to drop and the Nitrite levels to rise.  In response to rising nitrite levels, Nitrospira bacteria grow and convert the nitrite into nitrate, which your plants are able to use.  Once both bacteria exist in sufficient numbers your system is considered "cycled".  Testing for levels tell you more than what is in the water, it indicates what may be going on with your bacteria; and it's really your bacteria that drive the 'eco' part of the eco-system. Without bacteria we just have connected aquaculture and hydroponic systems.