After an aborted attempt to move my female with a brood, I noticed a bunch of fry in my main tank.  Obviously the stress of trying to move her caused her to spit them out (I hadn't realized they had hatched).  I've been able to net and move about 30 to a nursery tank.  My question now is what do I feed them?  I've seen egg yolks as an option and I've also ground up the small sinking pellets of my fingerling food.  I'm sure they won't be eating much since I just moved them, but any ideas/advice will be appreciated

You can buy commercial fry powder and crumbles but one package may be a 100 year supply if you are not planning on regular breeding and sale of the babies.   Regular adult tilapia food works.  They will push around the large pellet until it softens and they can eat it.  Sort of like tilapia water polo.

Tilapia fry LOVE algae.  Between litters, I try to prepare a 20 gallon tank by leaving grow lights on 24 hours a day.  Green algae all over the sides and pipe pieces in the tank are the perfect starter food.  A week after introducing 300 to 400 fry, the tank is clean.  You can also buy algae wafers which soften and are consumed.  These are mostly flour though.  The fish still like it.  Sort of like how I prefer Twinkies.   Fry will attack and pick at duck weed.

I feed all of the above with the staple being commercial fry food.  It has the protein and fat needed to quickly grow them to fingerling size.  In the wild, anything that comes by works.

Petco, and others, carries a product called First Bite, but they are small packets - which would be fine for a small number of fry.

But with this last batch of babies, I would have gone through a LOT of packets. So, as I have a stock tank in the back yard that is very bright green with summer algae, I attached a 1-gal paint strainer (new) half filled with filter fiber to the hose going into the first grow bed. Each morning, I would pull the bag off and attach it to the inside of the babies aquarium. About 3-4 times a day I'd give the bag a good squeeze releasing more of the algae. I took a video of the first time I put it in the aquarium...Babies at the Algae Buffet...but I don't have it on YouTube or anything to be able paste it in here; it's an mp4 file. If I figure out how to post it here, I will. Otherwise, here's a still-shot from it: 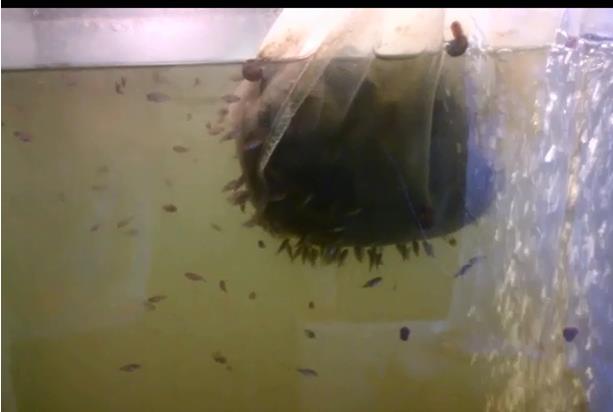 Adult tilapia food works but I don't find it optimal because it's only 35% protein. I had a jar of cichlid food I acquired awhile back that is 47% protein and I use that for the babies. But it's going to run out soon and I don't like spending money.

Fingerlings are a lot less discriminatory about what they eat. Duckweed, algae, their own waste, used bicycle parts, smaller fry -- anything.

Last week, I tried something new: I recently had to "thin the herd" by culling out some smallish females that I was never going to be able to harvest. Instead of tossing them (I live in the suburbs -- no chickens or anything like that), I decided to slow cook them whole in a toaster oven then leave them in the sun until they were dessicated. Then, I cut them into small enough pieces that I could shred in my hand blender. I then mixed in some adult fish food and blended some more, cutting the food pellets down to a manageable size. The fingerlings LOVE this.

I call this recipe Soylent Green.

I have used powdered adult fish food, just ground in a blender. But I made something else, I call it the tiliapia milk shake...lol I grow duckweed as a supplement, so I took some duckweed, maybe an accidental guppy or 2 , some adult food, a touch of real garlic, and put it all in a blender with some tank water. When I poured it in the tank, it was the best reaction I have had yet for feeding fry.