Deficiency? Toxicity? Lettuce plants no bueno. Can anybody help?

Hello fellow aquapons.  Gotta quick question for you very knowledgeable folks out there.

The lettuce in our system has had a few problems as of late, and I'm not sure what is going on.

It seems that only the older leaves are affected, and it starts with a general interveinal chlorosis, then the tips burn, then a bronzing / leathery thing happens.  They are very quick to wilt when it's hot, the roots are somewhat stunted and some of them tear easily when I harvest.  Some of them are kinda brown above the water line (they are grown in NFT channels).

Pictures are worth a thousand words, so before I say any more, here are some pictures.  If you know what's going on, please help!  Thanks everybody.

Wow, from some of those new pics you posted it looks like some pythium (root rot) going on as well. Honestly, it looks a little bit worse than what I had imagined. Don't freak out or anything...just sayin'...and the treatment is still the same.

During your weekly genocidal rampages, you should be spot checking the roots and crowns of your plants. It really helps if you catch things early on, as you then have a much better chance of taking care of the problem (with less drastic measures). So that is one of the things that you can do in the future. Many of these fungal/oomycetic pathogens can be pretty darn persistent...a lot of that probably has to do with their spores being so hardy. You know, like aphids...man, you leave just one female aphid alive and the next thing you know, you've got hundreds of aphids again...

If you have the time (if not, try to make the time) it would probably go a long ways towards your plight to remove the plants temporarily and totally sterilize the NFT components for spores. After you tackle the 'flushing' from the previous post (don't do it in reverse order).

A 7%-8% H2O2 solution and let stand for 20 minutes. And wipe down everything you can afterwards. And while the plants are already out of the system, you can dunk the remaining roots in a combo solution of high pH water and a bacterial based inoculant of your choice. Use whatever hydroxide (like KOH) you have on hand to raise the pH to about 9 and then add you bacterial inoculant...then dunk the plant roots and affected areas in that water. The fungi cant function at that pH level, yet the bacteria can. So it would be smart to give them a head start before putting the plants back into the system.

Inoculant your bio-filter as well while you are doing all of this.

If all of this seems like a pain in the ass...it is. But dealing with problems can be that way. (Hehe...there's a reason conventional farmers are so hooked on all those very strong, yet easily applied chemical products).

Increase O2 to the NFT channels in the coming weeks and months. As temps rise and O2 becomes depleted toward the end of your gulleys...that is an invitation to opportunistic pathogens.

Look into using some sort of anaerobic EM (effective micro-organisms). the Asian continent is light-years ahead of us folk on that one. If you can obtain a starter culture, you can perpetually brew batches yourself and not have to buy them again. This is one of the things we teach (shameless plug) how to do in the classes that I help Jon Parr with...Actually, talk to him about selling, trading, or giving you a starter culture, or at least pointing you in the right direction as to what is available and where over there in the US. It looks like there is some stuff on the market over there now, he may have some pointers. He's a pretty cool guy and will probably be real helpful (you can repay him by taking his class someday :)

Hey Benjamin...Here are two pics of some collar rot. The roots on the right belong to the stem in the middle. (I tossed the roots of the plant on the left before I thought to photograph them. The second pic are of the same plants, just turned around about 180 degrees so that you can see what the other side looks like. The one in the middle probably could have been saved but it's about at the tipping point. The plant on the left should be tossed IMO...even though the roots only looked slightly worse than those pictured on the right (which I consider not healthy and on their way to becoming a problem...but save-able). 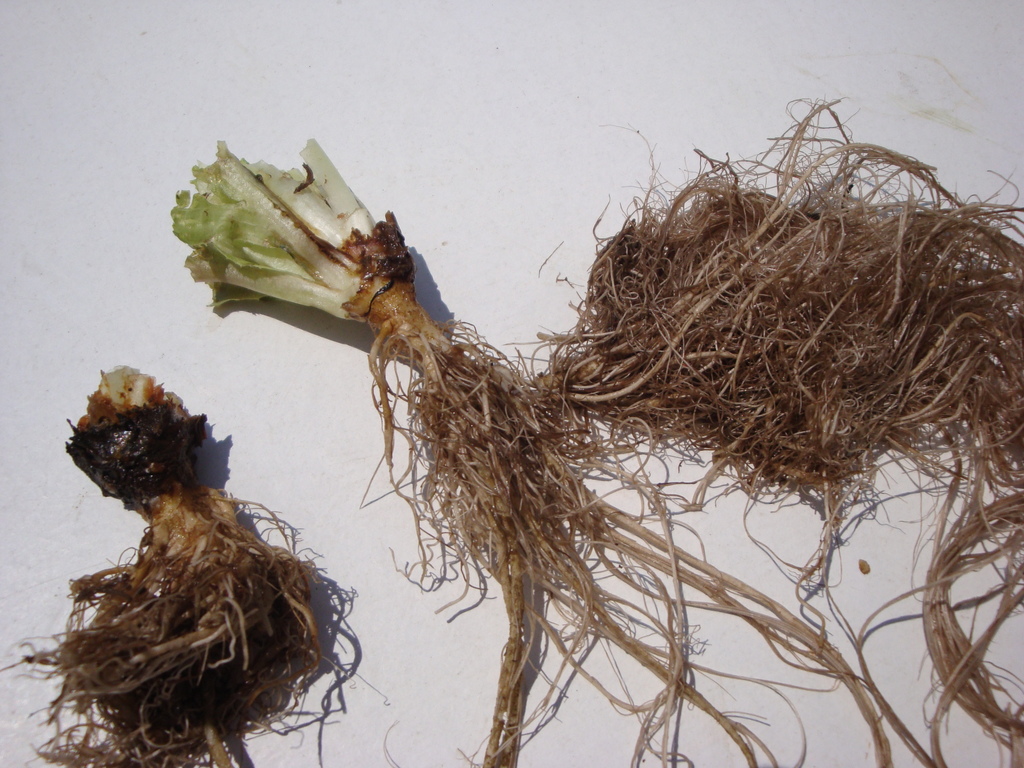 The crown on the left has that gelatinous growth (well beyond the water soaked lesion that it started out as) 360 degrees around the crown/collar...While the middle one just has that one spot (hence why it is "more save-able). Weather and time of year will play a big role in how quickly things play out... 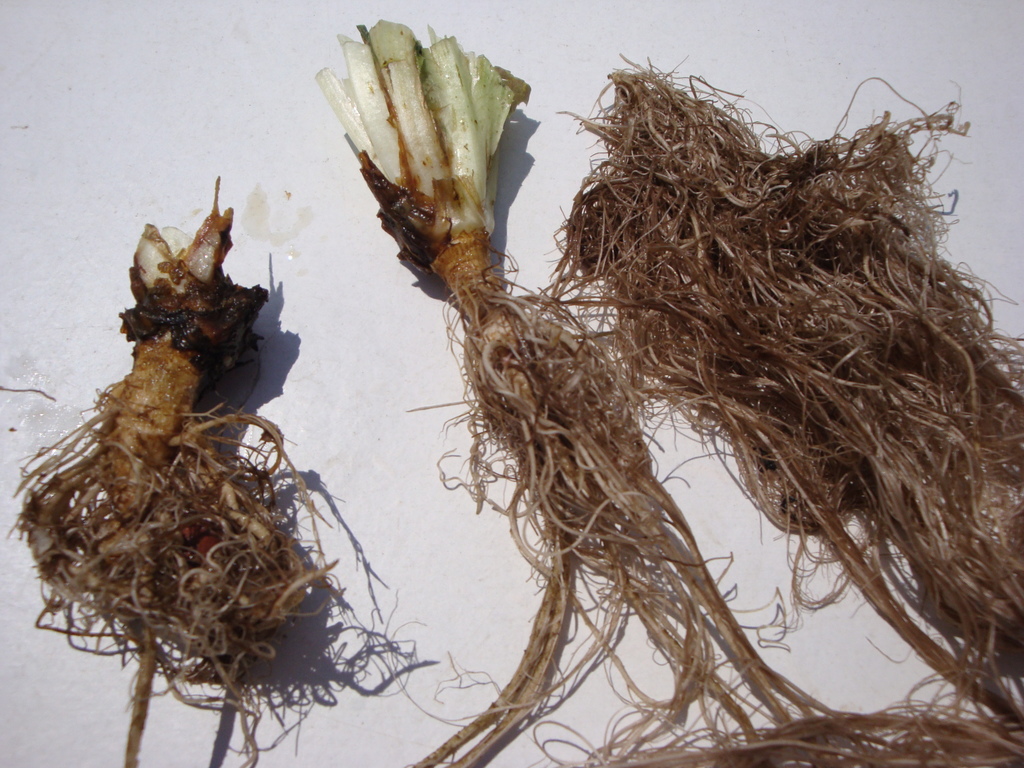 You can still try to save your plants for what it's worth, but in the future when you check them try to catch the problem much earlier...and remove plants right away. Inoculating seedlings at 2 to 3 phases of growth before putting them out into the main production area seems to help with this kind of thing. Any net pots from infected/removed plants NEED TO BE THOROUGHLY NUKED either with a bleach solution or with the H2O2. That is one vector that can easily be taken care of and should go a long ways in helping to not re-introduce spores/oospores...

Whew!  That was a bit exhausting.  But 7 hours later, the system is sterilized, innoculated, and ready to grow again!

Vlad, thank you again and again for your advice, patience, and all the time you have spent helping us.  It has been invaluable and we truly appreciate it.

I will post in 2 weeks and let you know how it works out!  Wish us luck!

Glad to be of some help. Keep us updated for sure...It'll probably help someone, somewhere, at some time or another.

Just be aware that pythium (root rot) seems to be somewhat more  persistent than crown/collar rot and you may have to keep up a regime of cleanliness and re-inoculation through the warmer months. Iv'e not ever had a pythium outbreak in the AP GH...only in some of my smaller systems (mostly mineral hydro). Out of the 4000 or 5000 plants we've grown out bio-ponically only about a dozen or so have ever started to show signs of some pathogen or another...

Keep on top of things and wipe down surfaces. Toss infected media into a separate bucket and sterilize/inoculate it. You really want to do as many of those "little things" as you can...and be persistent about good housekeeping (because the pathogens surely will be) until the danger of re-infection passes...

Good luck to you Ben.