well lets see everything is doing good but the cucumbers???

I did start the system backwards according 2 the rule of thumb,,lol

I built it ran it put the fish in frist n only had half of the flood n drain filled with rocks,,,3/8th pea stone,,,now its full with half pea stone n Hydroton,,,everything looks great,,but the cucumbers,,lol

My ph has been staying at 7.5 mine ya it has only been about 40 days that its been running n did start everything from seeds,, any comments?? 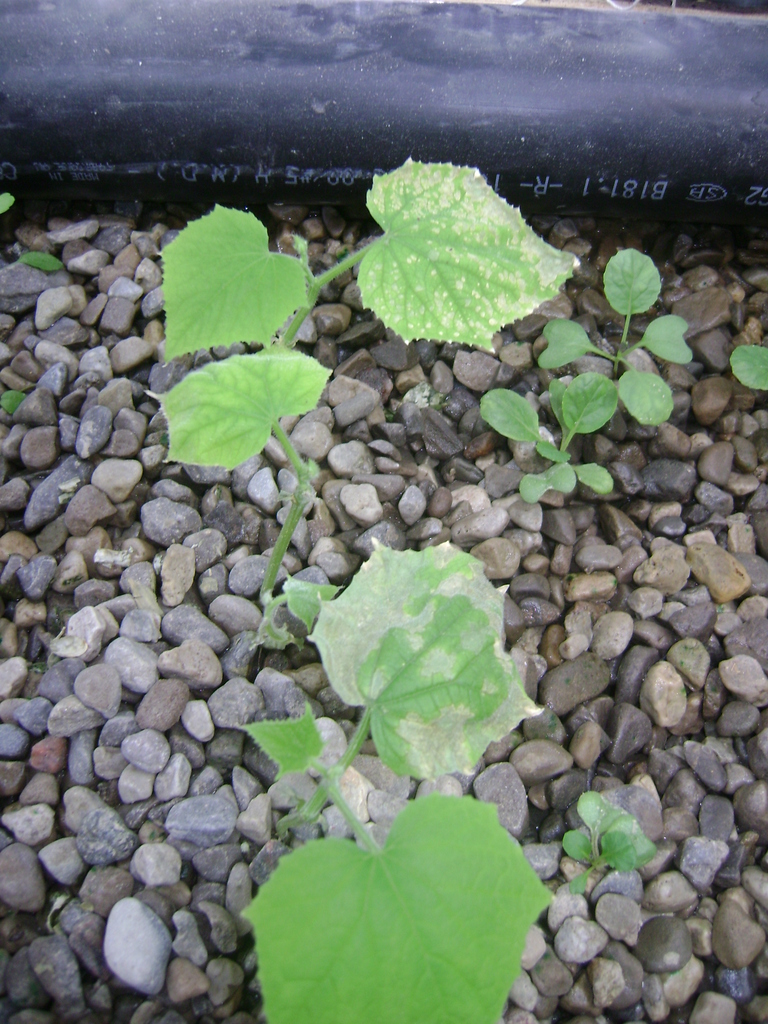 Maxicrop, does contain N as well as P and K, but not in any quantities that appear be harmful to an AP system. The makers MaxiCrop confirm this themselves, but in very  negligible amount. - 0. something or other -  The Kelpak people as well. (And most likely, I'd imagine Seasol too,  in the same minuscule quantities).

Your assumption is a good one, but apparently people have added things they were later sorry about. Things they "thought" were ok because the label said 'organic' or 'natural' or they've used in their gardens for years, think Miracle Grow. (Fertilizers of some sort or another with way higher N-P-K content than the above mentioned products, and god knows what else...heavy metals, arsenic etc...) Not that I thought anyone here in particular would do something like that...

Worm tea is one I will definitely be adding at the beginning at least. Started a worm bin just for that purpose :) And if I lived by the ocean, probably a small amount of sea water too! Can't beat it for trace elements and a bit of salinity...A little bit like free MaxiCrop :)

Though with the way we treat our oceans these days...who knows?

How are your systems doing now? Hopefully things have perked up. Did you order the Maxi+Iron? (you mentioned needing iron in your post). If so, do you find that at that pH you still need(ed) to add chealated iron to your system(s) once in a while?

Both systems have been running great for a while now. I received/appied the Maxicrop back in November. The growth has been excellent. I keep waiting for the pH to sette down - I'm not one to chase it up and down with chemicals. I've tested the media, no limestone. For now, fish and surprisingly plants, are all strong and healthy. Tilapia seem to thrive at 8. As far as iron, the ferrous sulphate in the Maxicrop (plus iron) product has been sufficient. Some sources claim it has advantages over iron chelate, in that it is slower acting and longer lasting in the system (I can't confirm or dispute that claim). I believe I will need to supplement iron in one form or another until the pH comes down (or I intervene) to mid 7's.

The Canna Bio-Flora product I tested, sent my cukes and tomatoes flowering out of control. Great product, but very expensive. It will also leave your water discolored for a very long time. I don't mind, but I've heard from some folks who do.

There are probably lots of great seaweed products out there.  We just want people to look carefully before using them.  The products that are generally appropriate for aquaponics have NPK numbers like  0.1-0-1.0  So little N, nearly no P and some K as well as trace elements from the sea.

Bear in mind that many seaweed products also have a version that has fish emulsion as well as the seaweed and those would not be appropriate since it would have the effect on the system of adding dead fish to your system so to speak.  Even some of the seaweed powders have higher Nitrogen amounts and might overload a system if the bio-filter can't handle an increase so don't assume that just because one person uses Maxicrop 0.1-0-1.0 liquid that it will be safe to dump a whole bag of the Maxicrop 1.0-0-1.0 wettable powder into your brand new system along with the new fish.  Keep an eye on the water tests whenever you start adding things.  And don't go adding lots of different things all at the same time since you won't know what is working nor what caused the problem if something goes wrong.

Now I'm running some tests to see if fish emulsion would be safe to use in a temporarily fishless system to keep the nutrients up for the plants but that idea is still in testing and I've discovered that some fish emulsion products use oils for covering the odor and I want to make sure those oils won't harm the fish put into a system later.

This forum is a bit different than the two Aussie forums I regularly participate in. I've been following it for some time but this the first thread I have replied to.

My hope is that anyone going down an AP path would have researched what you are sharing, before introducing ANYTHING to their systems that may harm plants or fish. To me, it's a given and part of the responsibility you take on in the hobby.

Though not recommended, some of us choose to plant veggies with more complex nutritional requirements from the start. This often requires "nutritional" intervention and products such as Maxicrop, Seasol, the Canna line, etc. are proven (they work) and are safe to fill the void until the system can produce on it's own. Personally, I would steer clear of fish emulsions. I'm curious, as a research project, what niche would this fill if successful? I guess lower cost....

Of course you know all about the nutrition challenges and could certainly teach me a great deal, but I don't know if it's discussed at length on the site. I hope it is, as many folks could easily become discouraged when their plants stall out and/or wither away.

I will try to be a bit more comprehensive, should I post replies in the future.

My apologies to Devin for busying up your thread with this.

in my case, needing to supplement nutrients has mostly to do with delivering towers to people who don't have fish in a system to keep the tower going.  They ask me what they need to add.  Well when I deliver I bring them a bucket of fish water but that will only last so long so I'm testing out to see what might keep the plants and bacteria going in those towers till I bring them back to the system but I want to make sure what I use will be safe to return to the system.

As far as the fish emulsion, well it's "organic" and so far the worst part is the smell.  Even sealed in the bottle it smells a bit.  I used some in a free standing tower display and I couldn't discern any "oil slick" The water from that little free standing set up when I did tests a week later showed about .5 ppm ammonia and nitrites up around .75 ppm and the nitrates up around 20 ppm.  pH was high but that is probably the fault of my well water.  In any case it certainly has stuff in it for the bacteria to eat as well as the plants.  I'll post more later when I place fish into a system that has had some used in it so I can tell you how safe it is for the fish.

I've looked at some of the pictures you've posted - great idea. I can see this being very popular as it functional and nice to look at.

I've had a similar challenge with nutrient life - I'd like to isolate an NFT circuit (it would allow more aggressive pest control for one), but still drive the NFT system with fish water from the main FT's. After the nutrients have been exhausted, I would move the used NFT water to the wicking beds. This maintains some efficiency and conservation, as I’d only be topping up with what the wicking beds would have needed anyway.

My question is how long will the fish water be useful in the NFT system? Can it last close to a week (about how long the wicking bed go between top offs)? Can I supplement with a shot of seaweed-type product to stretch it a few days?

I know there are many variables, particularly size, capacity and quantity for both NFT and wicking beds. I am only just now in the development phase. I’m thinking the water movement between systems will be either triggered by nutrient depletion in the NFT system, or wicking bed demand, whichever comes first. I still need to fill in the blanks but it leaves me with a similar question about fishless water and how long it will last.

In recent discussion on the subject, I was asked why not just skip the “fish water” and utilize tradition hydro nutes? It would certainly solve the problem…but then my idea of moving-water-though-multiple-systems-efficiently idea goes out the window!

I look forward to the results of your experiment.