How long does it take Blue Gill to reach "plate" size. I am considering BG or Tilapia or Channel Cats as my first fish. I have some goldfish in the tank now, and they seem to be okay after 10 days.  Here's a pic of the system. I have many more plants now, and they are looking good as well. THX. 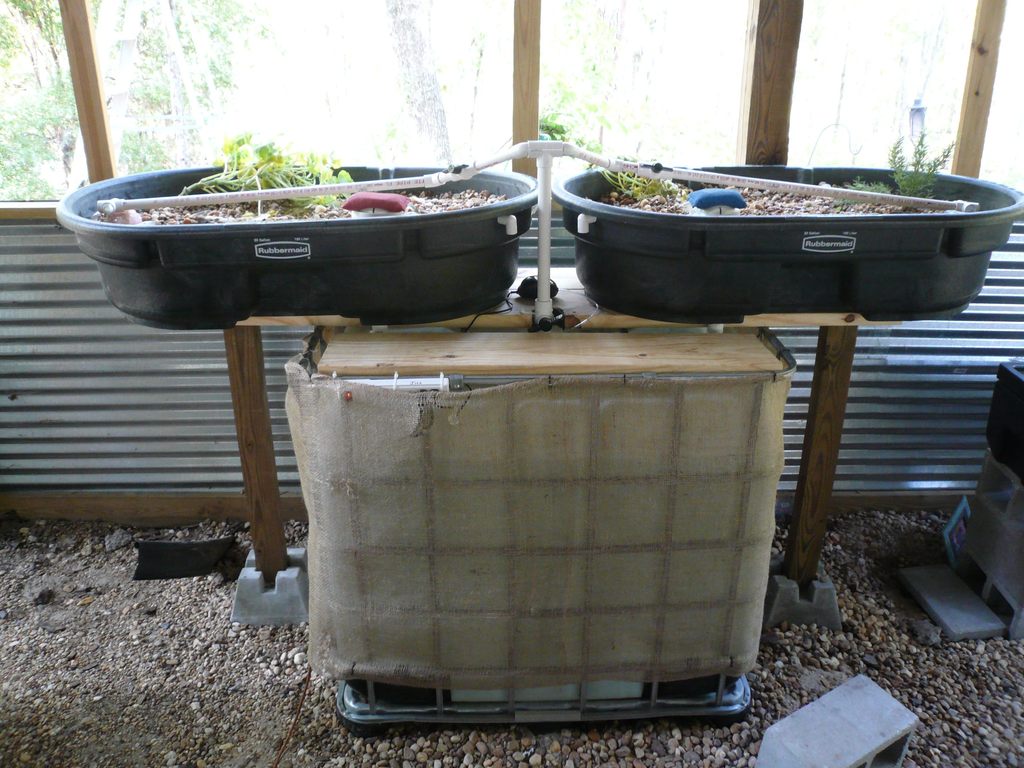 That tank is perhaps a shade on the small size for Channel Catfish through you might manage a few of them perhaps.

I would personally say go Bluegill since if you grow tilapia in there you will need heating for it or will have to harvest small before the cold kills them.

I'm currently running on the theory that without heating the water, bluegill may grow almost as fast as the tilapia and not require heating to get through winter.  Now I grew Tilapia for a couple years and was definitely not that impressed by the mixed gender growth rate of Blue Tilapia and if they are in a tank where they have access to the bottom to breed, forget it.

This spring I got my first bluegill and they seem to be growing fairly fast so far but I've only had them a few months so I'll have to get through the full year before I can be very confident about my theory.

By the way, I have some bluegill I can sell.

Permalink Reply by Robert McClellan on June 27, 2011 at 8:58am
Thanks. I am concerned about temp more than anything else. We have lost a lot of plants to very cold winters the last few years, and I don't want a repeat with fish! Although the tank is semi enclosed outside, it still gets pretty cold in Jan/Feb, and we may not be here every day to look after the temps. Can you recommend a BG source in Florida? I am too lazy to go down to the Sante Fe river and catch some! I have learned so much from your contributions here, thank you very much!

I have some here I can sell if you are interested in a number less than 60 fish and they will be more advanced fingerlings.  I'll sell them for $1 each but you will need to bring a container to transport them as well as some form of aeration (battery powered aerator or an inverter to plug in an aquarium air pump) for the drive home.

Otherwise you can Get Bluegill from Florida Fish Farms (352) 793-4224 They are in center hill and you may need to phone them several times before you catch some one in the office.  I think their minimum order is like $30 or it was a few years ago.  That would be like 100 of the small fingerlings which would be way too many fish for you small system in my opinion.

Looks like you have about 100 gallons of grow beds (will you be adding more grow beds?)

I would probably say 20 fish (provided you get the system cycled up before adding them.)

Cold can kill bluegill but if they are already grown a bit before the cold hits they should be able to survive our winters though they won't eat or provide much nutrients through the cold month.  (Same goes with catfish too, I once got a batch of very small fingerlings in December and they were too small to survive the lack of eating through the cold so I lost about 50% of those.)  Once the fish are a little bigger they can survive winter but don't go getting really small catfish or bluegill in late fall.

TCLynx you said that this fish tank might be small for catfish. I have a full 275 gal IBC FT that overflows to a 275 gal IBC sump tank that is pumping to the FT and 4 GB cut from 2 IBCs. I just started the cycling so will be looking at fish soon. I live in Southern UT so summers are as high as 115*F and winters can get below freezing. I understand that catfish can live in a larger temp swing than most fish and UT will let me have them. Is this system to small?

I believe TCLynx's issue with catfish in a IBC is about physical size of the tank and the catfish being able to swim around without constantly rubbing against things.