Ok update time.  I tried slowing down the flow and adding elbows, 90's increasing angle, adjusting pipe length, but the siphon never wanted to start.  I also tried to make an affnan mod by heating up a 1'' coupling in my wood stove (yeeehaw redneckaponics) and managed to get it to increase the diameter by an 1/8th or so.  The ID of my bell siphon doesn't really allow for much more of a funnel than that anyway (used available materials and it's really thick grey pvc).

SO, I think the drain pipe diameter must be the issue here.  There simply is not enough back pressure of water in the half barrels to start a siphon in a 1'' drain pipe.  I am now trying bushing again, this time down to 3/4'' pipe right as soon as the drain comes out of the bottom of the tank.  It hasn't had a problem shutting off yet but I still am having problems being able to slow my flow rate while still getting it to start.  Here is a picture of what the drain looks like: 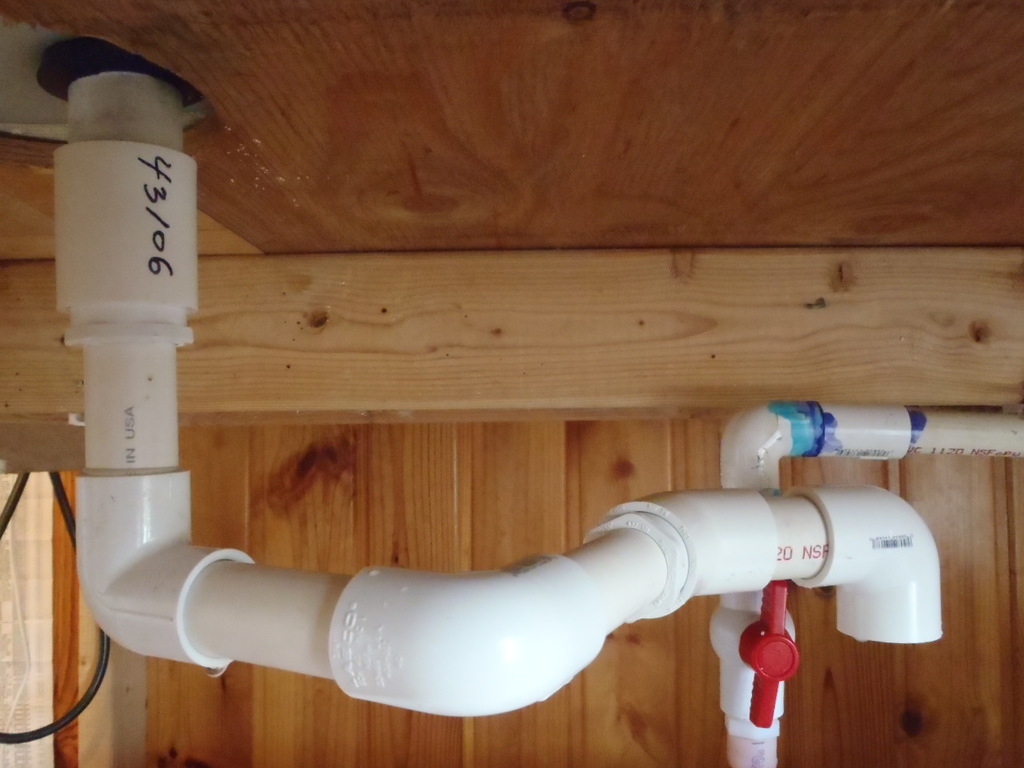 since the holes in the beds are already set up with 1" uniseal I was thinking to leave the bed section of drain 1" then have the entire drain be 3/4".  This would mimic the affnan mod in a way by by having the top of the drain pipe a larger diameter than the bottom.

Another option I could try is making new bells that would accommodate a bigger Affnan mod, but I'd rather exhaust my other options until then.

At any rate, here are the plants I have going in the bed despite the siphon not cooperating. 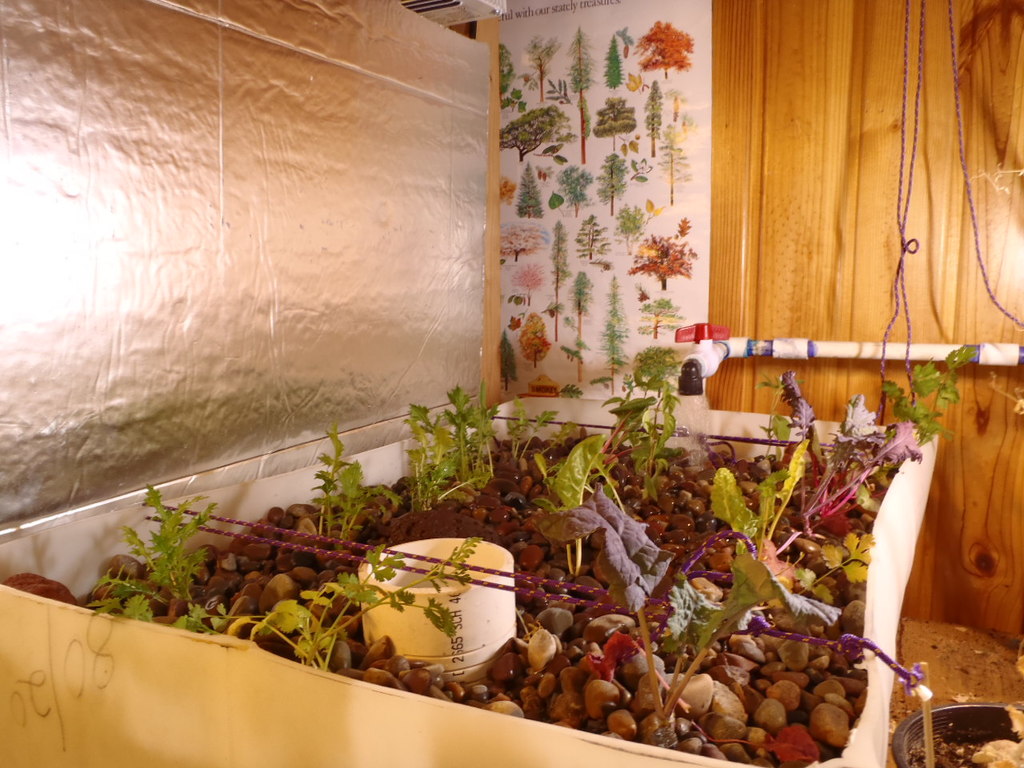 Basil, Kale, Swiss Chard, Cilantro, and I threw some pea seeds in to see if they will germinate.

In this discussion i posted a link to a different design bell siphon, i don't know if you looked at it? After looking at the size of your GB, 1" seems much too large to me. My siphon in a 25 gallon GB is done with all 1/2" pvc. I've cycled from 20 minutes to what i have now which is about 8 minutes(this design allows for a wide range of flow rates and is simple to construct). Even though you can cycle with the 1" pipe the flow rate you'll have to use will be too high for such a small bed IMO. Another thing, those red ball valves to me are hard to adjust accurate flow and i find they fluctuate and don't remain steady over time.

I don't know if you have seen these videos on YouTube or not but this is how I made my bell shiphon.

I used black air line tubing for the vent to prevent algea growing in it. I also used some old window screen around the strainer to stop any small rocks from getting through. The only time I have a problem with the shiphon not starting is when the pump starts to get clogged from a leaf that got into the system or when the exposed clear hose from the pump gets algea build up in it. Then I just shut down the pump and clean it and blow out the hose with full pump pressure. My system cycles every 17 to 20 min. My system is a kiddie pool (49.5 gal.) grow bed and a 50 gal. plastic pond. Here is another video from Affnan on his bell shiphon design

I hope this helps.

so I have replaced the entire bottom of the drain with 3/4" pvc.  I did this first because it was much easier than dealing with the stand pipe in the beds which is still 1''.  Unfortunately I still cannot get the flow rates down where I want them.  The next easy step I can take would be to put a 3/4" bushing on the 1" pipe and pull it down through the bed until it was almost to the bottom, cut it from beneath and then install a 3"4 stand pipe in the bushing.  This would leave a small section of 1" pipe (4 inches or so) in between the stand pipe and drain pipe section. Does anyone know what effect this might have?

In this discussion i posted a link to a different design bell siphon, i don't know if you looked at it? After looking at the size of your GB, 1" seems much too large to me. My siphon in a 25 gallon GB is done with all 1/2" pvc. I've cycled from 20 minutes to what i have now which is about 8 minutes(this design allows for a wide range of flow rates and is simple to construct). Even though you can cycle with the 1" pipe the flow rate you'll have to use will be too high for such a small bed IMO. Another thing, those red ball valves to me are hard to adjust accurate flow and i find they fluctuate and don't remain steady over time.

Can you say what's happening with the siphon?

Permalink Reply by Josh Metten on May 23, 2011 at 8:48pm
Ya sure.  I've got the system running now.  What I ended up doing is cutting off all of the 1'' pipe besides about a 4'' section that runs through the uniseal and has a coupling on each end, which then gets bushed down to 1/2'' which I am using for the stand and drain pipes.  I kept with the same 2'' bells as before and they are working fine.  I added goldfish a week ago and they are doing pretty well.  They are still hanging on, waiting for the nitrite bacteria to colonize the bed and stabilize my nitrite levels which are way too high (over 3.5mg/l.)  I've lost a few fish unfortunately but the rest seem to be doing fine.  I'll put up pictures soon

Glad to hear of your success......... great thinking to reduce to the 1/2" bushings, that way you don't have to change the entire pipe run. I bet you have a wider control now with the flowrates/discharge.

Permalink Reply by Steve Sanders on August 5, 2011 at 8:07pm
SLOW DOWN THE WATER GOING TO YOUR BED, AND I'VE FOUND THAT THE DRAIN PIPE WORKS BEST WHEN THE LAST PIECE IS ALMOST HORIZONTAL ........