So my first attempt at an aquaponics setup has been an excellent example of how not grow plants or fish. I'm a complete noob.

My ebb and flow setup has a 55 gallon drum (fish tank) that drains into a 12 inch deep 3 foot diameter grow bed.  The grow bed then drains into a sump.  I have a timer that turns on a pump that pulls from the sump up to the fish tank and process begins again.  The fish tank always has 40 gallons of water until the pump starts. The fish tank drains at about the 40 gallon mark.

I've read some guides and listened in on a few webinars, but I'm still unsure how often the timer should pump water through a system. Most of the information is very general and doesn't offer an example from which I could at least calculate a rough estimate for my system.

Finally, the pH of the system is quite high. It sits at 8.2 and will not budge. I've tired using both elemental sulfur and lemon juice. Both would dip the pH for about a day and it would then bounce back. So I'm concerned my media is buffering to keep the pH high.  I'm using well water that tests at about 8 (I am not using our house softened water). I'm using red lava rock (washed before using) and some pea gravel for the top layer to save my hands some grief.

Any tips or a link to a guide with some more concrete information would be appreciated.

Here is an image of the setup. I have changed the media a little since this photo.

New systems usually have a high pH if using well water.  You might be able to bring the pH down a bit providing the pea gravel you used is not limestone.  And if it is not limestone the pH will naturally come down over time as the system cycles up because the bacteria that covert the wastes to plant food actually have an acidifying effect.

There we go. I think I saw something similar to this a while back. Great solution, I'll give it a shot. I'll have to check out the source of the pea gravel, the bag doesn't have any information on it but maybe the company site will have some information.

Permalink Reply by TCLynx on June 1, 2011 at 12:45pm
You can always put a hand full of the pea gravel into a cup of vinegar and see if it fizzes.  If it is heavy on the calcium carbonate or lime, it will tend to bubble as the vinegar and calcium carbonate react with each other.  If no bubbles then you may not need to worry about it.

Still not having luck with my system.  Here is an update which is also posted in another thread about how often water should be run through the grow bed.

I am also curious about how often water should go through a grow bed. The pump on my system runs once an hour.  It takes 4:30 minutes to fill the grow bed and 12:00 for it to drain.  So the bed is dry for about 48 minutes each hour.

The last few months I have had no success with bacteria showing up.  This system had been running without fish for months.  I then added some fish which all died.  I'm now on my second group of fish (tiny 15 cent Petco wonders) and they are starting to die off.

The nitrate/nitrite levels have always read zero in this system.  Currently the ammonia levels are between .25 and .5 ppm. Which is toxic at the pH level of the systems water, more on that below. The water temperature is anywhere from 62 - 72 F during the day.  There is a 50 gallon aerator in the fish tank.  The fish tank sits with 40 gallons in it when the pump is not running.  The fish tank is drained from the bottom using a piece of pipe that extends to bottom and has a baffle on the end.  The entire system is inside a small hoop house.

Is there not enough light for the fish? I've thought of cutting a different drum so it could sit on its side, which would allow much more light into the tank.

The pH of the water is 8.2 and is strongly buffered.  The well water used for the tank reads 8.  I have put some of the lava rock and pea gravel that makes up the media in vinegar to see if there is any lime, no bubbles.  I have tried a number of natural items to lower pH but it doesn't move or bounces right back. I finally picked up some pH down which doesn't seem to do much either, the pH bounces right back.

Here are some pictures of the system. 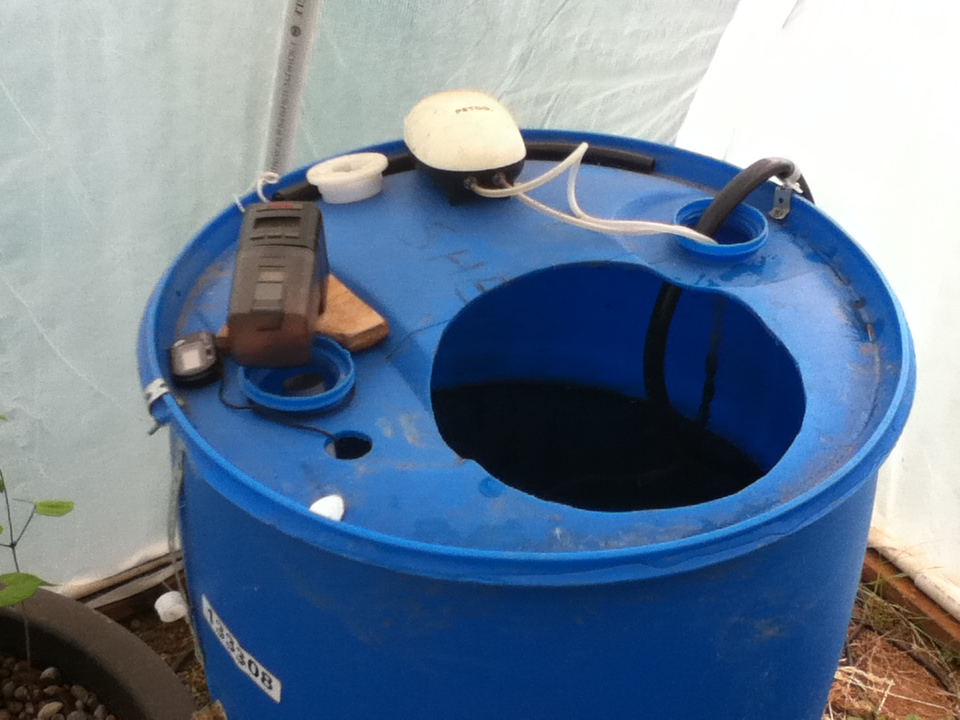 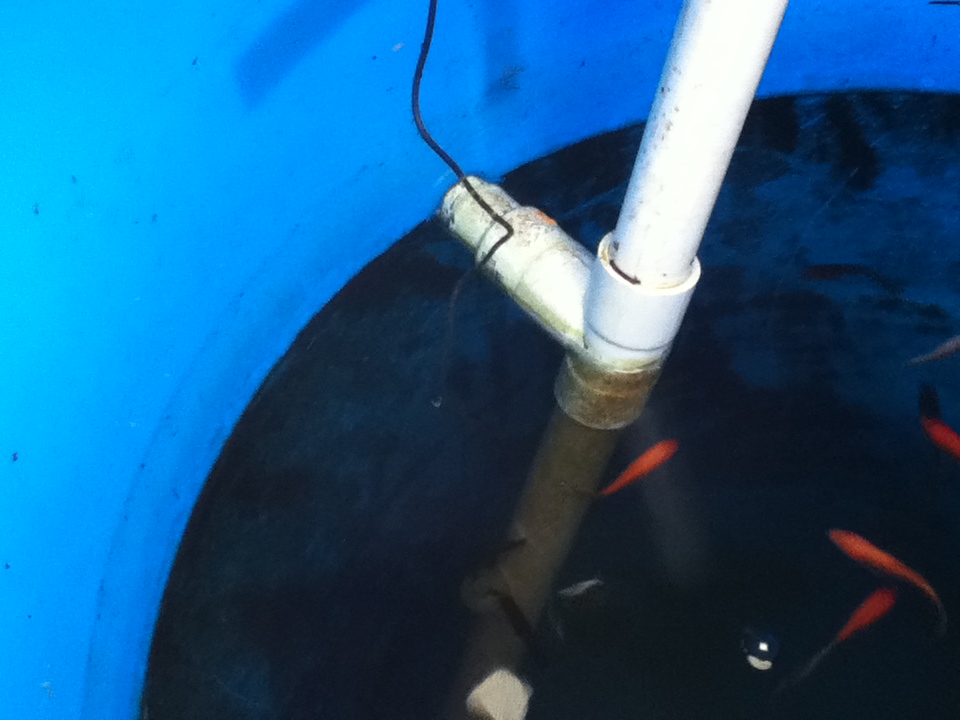 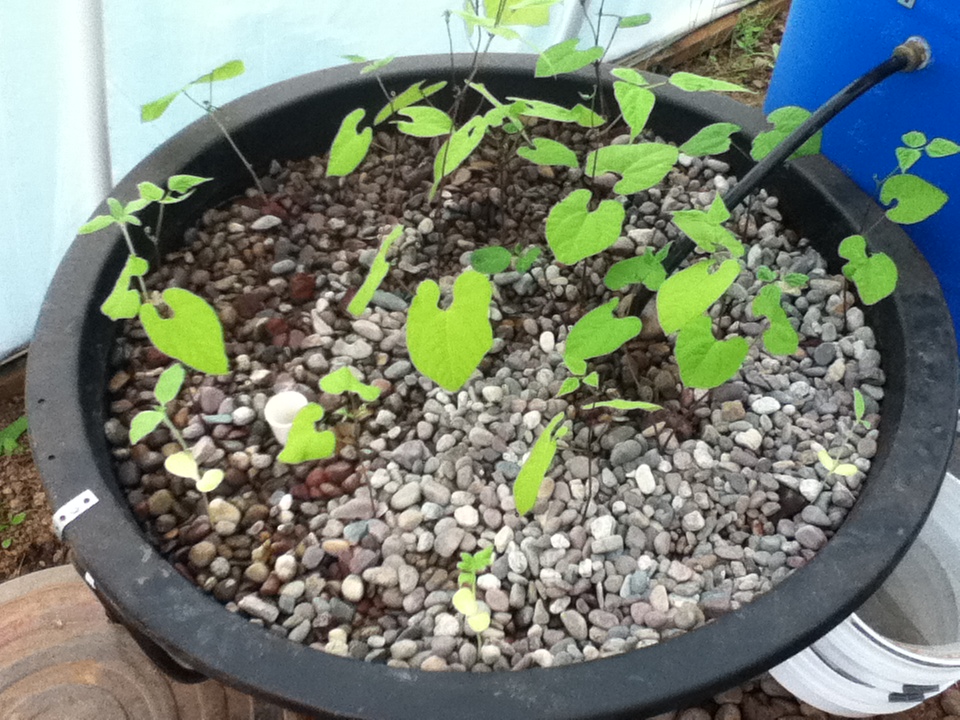 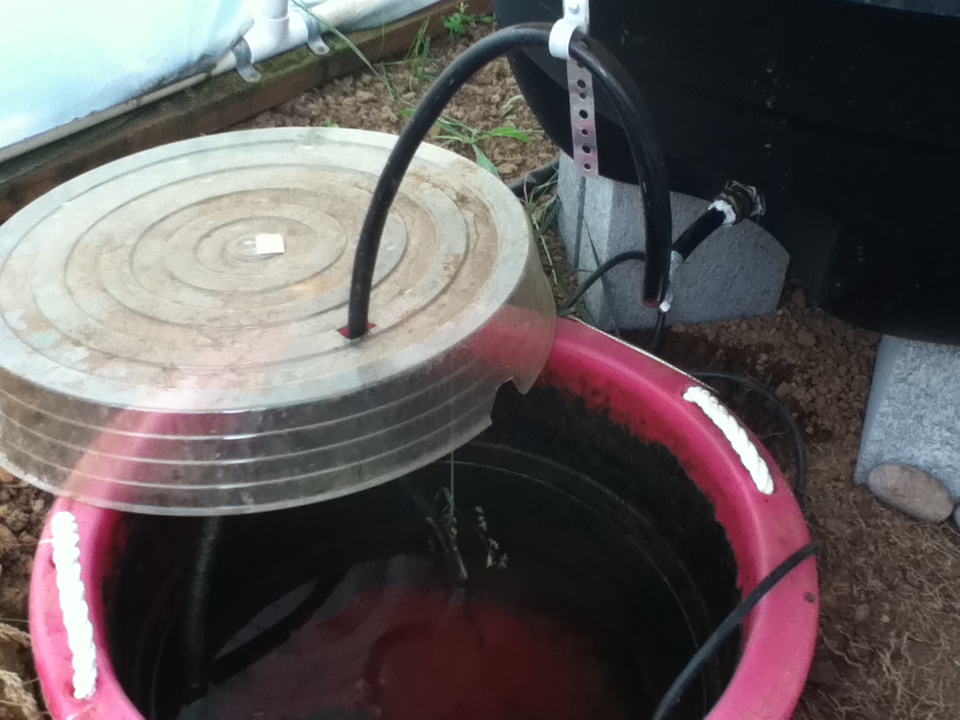 Permalink Reply by Iron Gamer on July 15, 2011 at 7:15pm
Btw, thanks for the tip on the venturi drain TCLynx, it works great.


New systems usually have a high pH if using well water.  You might be able to bring the pH down a bit providing the pea gravel you used is not limestone.  And if it is not limestone the pH will naturally come down over time as the system cycles up because the bacteria that covert the wastes to plant food actually have an acidifying effect.

I see in you introduction you've buffered with lemon juice and sulphur. That's a big problem in AP as it kills off the nitrifying bacteria and will prevent you from cycling. You'll probably be better off dumping the system water and replacing it with new water.You need to recycle, this time forget about the PH(8.2) as the system cycles the PH will gradually come down and its better to run the pump 24/7 when cycling to speed up the process, you can put the timer on after you've finished cycling. Please read this post for a better picture on citric acid(lemon juice) in AP.

Thanks for all the help.

I replaced the old grow bed media with a mix of red lava rock (washed out thoroughly) and hydroton. The lava rock is in the bottom, there is enough hydroton on top for easy planting. Does anyone in the USA make something similar to hydroton?

I cycled up the system without fish using pure ammonia from Bi-mart.

I added more water than the sump could hold and had the pump run continuously.  A valve on the grow bed adjusted the flow so the sump never ran dry, never overflowed, and kept a fair amount of water in the grow bed. After about 5 days I had nitrates at around 8ppm, nitrites fell to about 0ppm by about 8 days.

I added a powerhead to the fish tank. The remaining 2 feeder fish have seemed quite content in the tank now for a couple of weeks.  I'm picking up some bluegill this week.

The ph of the system is still around 8. I'm just going to leave it there as the fish and the plants seem to be doing fine.

Great going so far. You've cycled up fairly quickly i see. At 8ppm PH you will have to be on the ball with feeding regime, being careful to keep ammonia on the low side of things. You can look at this for alternative media  http://aquaponicscommunity.com/forum/topics/media-1

Permalink Reply by TCLynx on August 17, 2011 at 4:13pm
If you can collect rain water or adjust your source water pH before using it to top up your system you will probably see the pH come down but I agree that if things seem fine right now, don't stress too much, let it happen naturally.

Has any one added drift wood to the systems to drop PH  I used to  used wood and leaves and vinagar to breed amazon fishes  figured that it would work for aquaponics too.

I've read studies about Tannic acid leaching from drift wood and their inhibition of nitrifying bacteria. My concern is that Ap is recirculating by design so tannins will buildup over time. I'm not implying that this is going to be a problem developing in one night but could be a factor over the long term. In natural systems the bio filtration is on massive scale and proves to be much more forgiving than a small looped system. I've also read that Tannic acid are well tolerated by freshwater fish and may even enhance growth rates!