When looking for aquaponics business plans, one of the better ones I have come across came from 'ACME Aquaponics' you can find the business plan here: http://www.imbplan.com/uploads/Acme_Aquaponics_Business_Plan.pdf

However their website is down, and I cannot find any information about this business.  Did they fail?  Does anyone know how/why?  I feel like a lot of people are piggybacking this business plan, and if the plan was flawed causing the business to fail, this could be bad for a lot of newcomers.

Does anyone know what happened to ACME?

It was a company founded by Wile E. Coyote. It's main business was hunting roadrunner, but when the roadrunner out smarted him he then switch to hunting fish. He filed bankruptcy soon after a tilapia planted a bomb in his bell siphon. 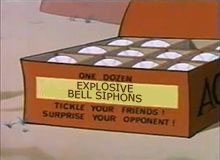 intersting business plan, but it seems to me that they are WAY under selling the production value of the vegitables.  most folks i have talked to say that the plants are the money items, with fish coming 2nd mostly due to the length of time it takes to get them market size.

Interesting that it has confidentiality language in the front of it but at the same time uses fictitious phone and e-mail information.  I wonder if the name and address is also fictitious.

I thought it was a joke until I clicked on the link (and half still thought so even afterwards, though there seem to be some useful nuggets strewn about in there). The use of the ACME name doesn't exactly pump one full of confidence (if it's not a gag). Aren't their products notorious for failing catastrophically right when you need them the most?

Mila Clacker from Clackamass county Oregon??? Who knows. I like how they set aside $1,000 for legal expenses/issues. Perhaps from ones that may arise from  'filleting and selling fresh fish for customers on the spot'  I imagine...

yea, I don't know what the laws are in Oregon but here in FL, if you take knife to fish, you better be doing it in a commercial kitchen with properly trained food handling people.  Otherwise sell them whole on ice.

After breezing through the Business plan a few things popped out at me causing me to believe this is a very generic buisness plan, not a specific busness plan.  Maybe this was a class project or a trial run to get funding from a grant.  The reason I wonder about this is the "local' information provided in the plan.

I live in the PNW not too far fromt his area, and have family living in this region. So I am a little familiar with the "area" this Plan seems to be referrig to.

Look on page 12.  There are several communities listed...Bora, Beaver, Melino, Boltville, Ore City, Wilson.  All these communities are closely named to ones that actually exist in the Willamette Valley, but those are not the real names.   There IS an Oregon City, an Wilsonville, a Beaver Creek and a Beaverton, to give you an idea. There is a Beaver, OR, which is an unincorportated area near Tillamook, OR, but it is NOT in the WIllamette Valley or  near there. Why the ficticious names?

In the Management Plan the author mentions a hard winter in China being responsible for lower numbers of fish imported to the USA at one point...Yet the author  feels that the winters in the Willamette Valley are not significant to worry about?  Average high winter temp is 48 degrees and the average low is 35 degrees F.  In order to have a significant tilapia crop ready for the Farmer's Market season  the operation would need to be indoors with significant heating growing fish in th winter.  Solar?  Well, considering the number of sunny days in the winter in the Willamette Valley, I am not convinced that solar would be a viable option for this operation alone ...Just to start.. The energy costs for heating would be phenominal.  I'd need to see just how this person has figured this would really work on a large scale.

The Plan looks as if this person knew how to write a managament plan.  Covered all the  information bases needed to look good.  Good conceptual effort. But I do not think the information was completely and realistically tailored to the area, and the aquapoincs industry.

Selling fish at Farmer's Markets in OR. has specific regualtion to follow.  Not impossible.  The Fillet operation on site would come under some serious regualtins in Oregon though....And if you read the marekt plan, and the turn over of fish expected and the staffing level,  Meeting all that AND operating with the one person to start with (and then adding as the operatin grows - sounds wise) while meting sanitation requiremetns, certifications, and rpductin needed to be profitable...

Well, it is designed to start off as a grant supported operation...Read the beginning of the Plan.  Starting this way what we have is NOT a profit grown business.  It is yours and my tax dollars at work (unless it is a private grant of course - but still this business would not be standing on its own feet)...

In my opinion, it would be best to look elsewhere for a business plan to emulate. One that is tried and true and you can follow actual number as proof that the Plan actually works.  I may be wrong about this plan...And I would like to be wrong.  But my advice, knowing the false/ficticious information written in the plan, would be to look for another source.

By the way, I like Mr. Kadish's explanation...I can almost see a new series of cartoons!

Just so you know...I do know hte difference between a Business Plan and a management plan...I went back to correct the errors in my last message...and the many typ-os...but time had passed...guess thatt's what happens when a person tries to do too much 'multi-tasking'....So just change all the "mgmgt Plan" refernces in the last message from me to "Business Plan" and try to ignor the typos...

Thanks for that Assessment Converse, sounds very reasonable to me.  I didn't read enough of it myself beyond figuring that there was much fiction in it.