Described earlier stages of this project in "what's your aquaonics set-up?" thread but will continue here in this new discussion devoted only to this project.

First things first:  hats off to Glenn Martinez of Olomana Gardens in Hawaii.  The aquaponics part of this project is based on his "tray-ponics" design.

Justin, thanks for offer of additional help, but had trouble reaching you by email, and my time to devote to this lately has been in small chunks. Door is on the right.  Plant trays are arranged in a U-shape on tables.  Fish tank will be under the table in the foreground on the right in the picture above. 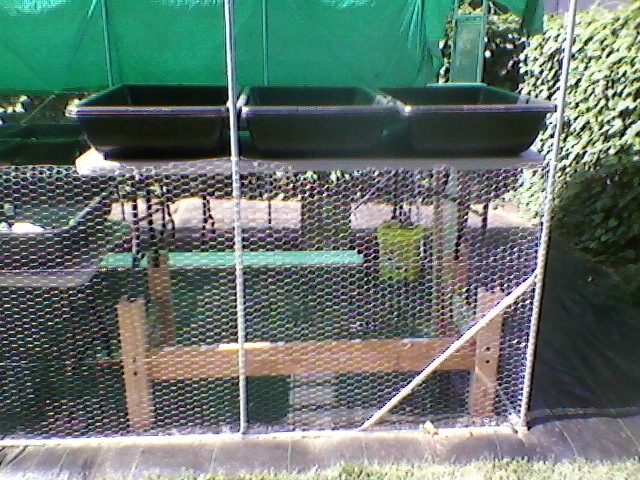 That table is now raised about 18" higher than the other tables, as shown in photo above.  That is because the 3 trays on that table will be ebb-and-flow media beds, and the drain pipe under those trays will dump into the first raft tray, immediately to the left of the raised tables.

The three media bed trays are "ganged", ie plumbed together, along with an external autosiphon in a bucket (aka "bucket siphon".)  A pump in the FT under the table will bring water up into the media beds.  The water level in those beds and in the autosiphon will rise and fall together as if they were all one tank.  This shot shows the position of the bucket siphon relative to the media beds (sans pipes): Here's another shot of the bucket siphon, plumbed, without the bell in place: 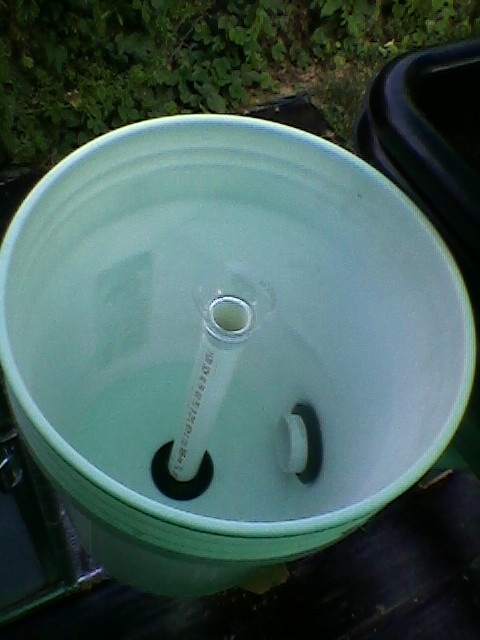 The three media beds are double trays: a top tray with a bunch of holes in the bottom sits on top of each media bed tray.  The top perforated trays hold all the media.  Water flows through the holes into the bottom tray, where there's about 1" of space that's clear of media.  Once the water reaches that bottom tray, it goes out a drain in the bottom.  Having that clear space under the media should help prevent too much biogunk from clogging the media.  Here's top tray lifted to show bottom tray and drain: The scraps of PVC are to make sure the bottom of the perforated tray doesn't sag too much with the weight of the media.

All the other trays to the left and around the U are raft trays, all connected to each other so that water will flow from one to the next and so on, clockwise around the U.  Here's are some raft trays plumbed together: 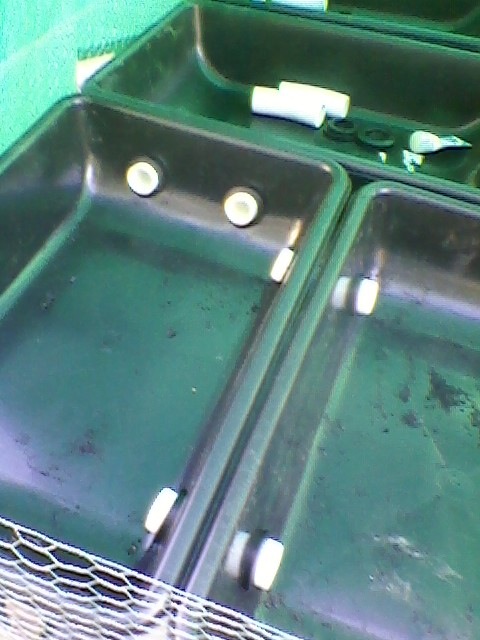 The last raft tray in the series will have a standpipe that will set the raft trays' water level.  Water will drain from there back to the FT by way of a pipe under the table tops, tracing around the U counter-clockwise. [In the picture above, the big white horizontal strip is the drain pipe.  Water flows from right to left in this picture.  The shiny diagonal slash at the top of the picture is part of the metal framing of the table.  What looks like it might be another pipe in the upper left corner of the picture is actually just the rounded edge of the plastic table top.  The box in the lower left has my shade cloth, which will replace the temporary green tarp I have up now.]

This system has no sump tank.  Water level in the FT will fluctuate a bit.  Oh well.  This system also relies on the media beds (and the worms in them, if I follow Glenn's way in that too) to clean the water enough so the roots in the raft tanks don't accumulate too much biogunk.  We'll see.  If it doesn't work, may have to add a clarifier of some sort.

Picture below show more of the drain pipe under the table tops. Water would flow from right to left in this picture.  FT would be on the left, more or less out of this picture: 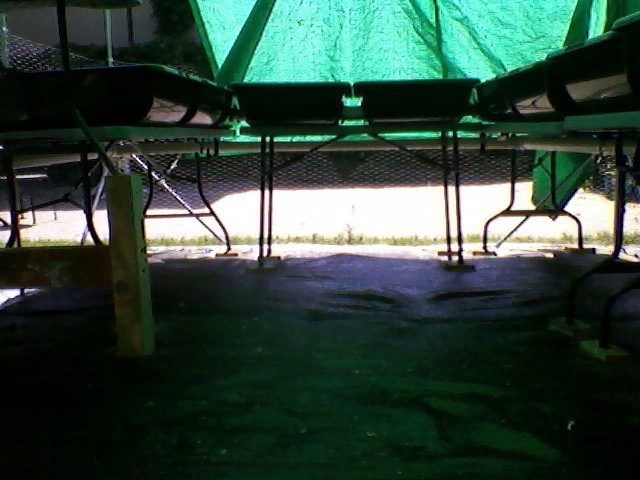 Next:  waiting on some uniseals to arrive so I can finish connecting the rest of the raft tanks.  Then will move the FT in and start testing the plumbing.  Etc. etc.!

Hope to be able to incorporate plant towers in this set-up at some point in the future--phase II.

Any and all comments and suggestions greatly appreciated.

Now, off to Wisconsin for a week to visit Growing Power, Nelson & Pade, and Sweet Water.

The siphon action drops water level in bucket and media bed. When that level gets to bottom of bucket, arched openings in bottom of the bell allows air to enter and rise thru the bell to break the siphon.

So, yes the bucket bottom is lower than the media bed bottom, but that's not what causes the siphon to break. Theoretically, what it does do is allow the media bed to drain all the way down each cycle, which should help inhibit buildup of anaerobic zone at bottom of media bed.

don't you think the accumulation of sludge in the bottom of your double tray bed is somewhat important for nutrient availability and eco system for the plants instead of just scraps of PVC ? Then add in worms that will habitat the sludge zone.

I'm planning to build a double tray just like yours BUT only 1 grow bed for now.

Are those trays you are using concrete mixing tubs ? Unfortunately mixing tubs are only 8 inches high but making it as double trays will increase the height of the grow media by adding media on the bottom tray instead of PVC . I'm basing this from Murray Hallam's statement that he found over the years of doing AP that having 1 foot high grow media is best.

What edible fish do you recommend for AP ?

Have you tried any of these fish ? And if you did what are the pros and cons based on your experience ?

Wish we can access Jade Perch ? the Omega 3 content is off the chart on that fish even higher than salmon.

Sorry about the questions. Hope you don't mind.

Good questions.  My intent is to process solids in the media bed via aerobic bacteria and worms to make those nutrients available to the system.  In theory, the media environment remains aerobic due to the ebb and flow of the water and air through the media.  Anywhere solids get clogged up in the media, anaerobic bacteria would take over.  They would break down the solids but they would also release undesirable compounds, so no, I don't want buildup of sludge.  I don't think worms in the system will necessarily process all the solids quickly enough to avoid development of anaerobic zones if the system isn't designed to optimize water flow.  The clear space under the "false bottom" is part of the design to optimize water flow.

Interestingly, at the national Aquaponics Association conference this weekend, I did hear something about a more benign or beneficial form of anaerobic digesting.  Essentially it is the same process and the same microbes used to ferment various foods.  At this point I would not know how to promote those microbes in the system while inhibiting the typical ones that release harmful compounds, so I'm sticking to trying to avoid all anaerobic zones in my system.

In the current version of this system, I use a plastic concrete mixing tub in my system for deep-water culture (raft) where a larger tray would not fit.  At 8" tall, it is plenty deep for that purpose.  Initially I did use mixing tubs for all the rafts and for the media beds but have moved away from those as explained in a recent post in this thread.  The whole point of using double tubs for media beds is to give you a false bottom with 1" of free space underneath to promote water flow.  Filling the space under the top tub with media would defeat that purpose and would add only 1" to the overall depth of the media.  9" or 8" or 6" or even 3"-deep media beds are all fine in my opinion unless you grow plants with roots that are longer that that, at which point the roots get into the plumbing and clog things up.  Current version of my system uses those two nested 40-gallon stock tanks which gives well over 12" in media depth.

I use bluegill.  They are hardy, are compatible with our local year-round climactic conditions, and taste great.  Would love to use Sac Perch some day.  They may become more available in the future.  I don't use tilapia - not only are they restricted in our area, I understand they would require significant artificial heating for several months of the year, which to me is not sustainable economically or environmentally.  I think other people have commented about various fish species in other discussions in the Sac AP group.  You can search all those discussions for that info.

Thanks for your interest!

No, the water is pumped from the sump tank into the bucket via a tank fitting (aka "bulkhead fitting") in the bottom of the bucket.

Permalink Reply by Alan Barnett on September 15, 2014 at 10:17am
I visited Glen's farm earlier this year, what an amaizing place. The bucket is like an external bell siphon. The trays are nested together so there is no room for a stand pipe. Glen also used the buckets to siphon multiple grow beds from one point.

Thanks for your message Alan.  Lucky for you to have visited Olomana Gardens in Hawaii!  Yes, the bucket isn't just like an external bell siphon, it is an external bell siphon.  And yes, not only is there no room for the standpipe of an internal bell siphon when you use a false bottom in the growbed and locate your siphon outside the growbed, there's no need or desire to have a standpipe inside the growbed, because the external arrangement has many inherent advantages:  does not take up room in growbed; can be situated anywhere; much easier maintenance; allows more complete draining of growbed; and no risk of a vertical cylindrical media guard lifting up and allowing media into your siphon and other plumbing, since there is no such media guard.

thanks for your informative reply.

For the bluegill, no heating required at all even during winter or cold days ?

Do you think FRESHWATER FISH COMPANY in south sac is a good source for the bluegill ?

Permalink Reply by Paul Trudeau on September 15, 2014 at 2:12pm
If you can keep them in the 60's, they will continue eating and you will get better plant growth. If you can't heat them they'll survive fine but won't eat for those cooler months.

so my fish tank will be a 50 gallon aquarium, prolly will support 10 to 15 fishes.

Up to how many bluegill can a 50 gallon support ?

I was just planning to use a 100 watt Submersible Aquarium heater. This should work. right ?

I am also planning to wrap some insulation Styrofoam around the aquarium during the cold days.